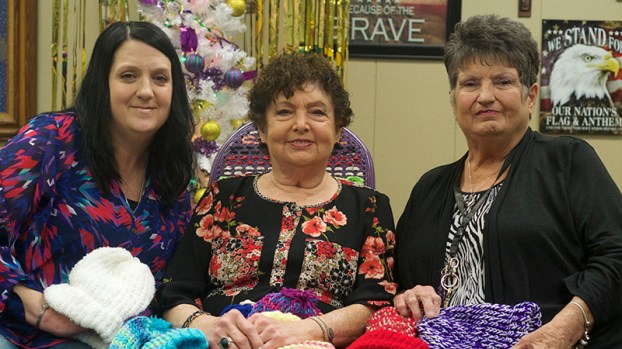 Heather Kaiser, left, Sandy Morris, center, and Diane LaPoint are a part of the Seniors Rocking for a Cure team at the B.A. Ritter Senior Citizen Center that made more than 10,000 decorative hats for cancer patients and participants of Relay for Life. (Cassandra Jenkins/The News)

NEDERLAND — Sandy Morris has made hundreds of hats, spending several countless hours knitting or crocheting in front of the TV — and it’s all for a good cause.

Morris is a member of the B.A. Ritter Senior Citizen Center, 914 Boston Ave., in Nederland and an integral part of the Seniors Rocking for a Cure team, which makes more than 7,000 hats for cancer survivors and hands them out at the annual Relay for Life.

“My niece died when she was 34 from cancer, and she used to always wear hats,” Morris said. “I was so happy to start making these again for other people because it reminds me of her.

“I know how she would get cold, and these hats helped keep her warm. It made her feel good to have something besides just a baldhead, so it makes me feel good to help others out in the same way.”

Diane LaPoint, director of B.A. Ritter Senior Citizens Center, started Seniors Rocking for a Cure nine years ago after her husband, James LaPoint, died of cancer the year before. 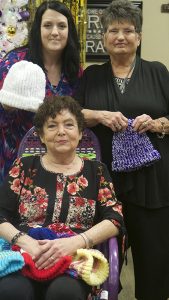 “The team started in memory of my husband,” she said. “I always remember that he would wear these ‘funny hats,’ as he called them, but he was always pulling one off his head and giving it to someone else who needed or liked them. So, we had to keep making more. Eventually, after he passed away, we decided to start making them again in his honor.”

Five months out from Relay for Life and the small group has already made hundreds of hats.

“We have had people from our senior citizen group crochet and knit hats for cancer patients,” LaPoint said. “We’ve done over 10,000 hats in the last nine years. (Morris) went to high school with my husband and she has been volunteering for this event for seven years.”

LaPoint said when the survivors make the final lap at Relay for Life, each team gives out a gift, and those gifts include the hats.

“Just to see it all come around and see what it means to people is why we do it,” she said.

Morris said she tries to makes hats for every age, from every color and style.

“I try to put beads or flowers or something on each different hat,” she said. “I want them to feel good when they wear it. Sometimes I even make matching sets for a parent and a child, so they feel connected. I even try to fix them for men and women.”

Morris said she has made ninja turtle hats and fairy caps for children, as well as school themed and holiday style hats.

“It just makes me feel good to do it,” she said. “I make them when I’m watching TV or hanging out. Sometimes it takes me two-three hours but it keeps me motivated and inspired to do it because it means so much to people.”

Heather Kaiser, assistant director and daughter of LaPoint, said all hats are made from materials donated to the senior center.

“You never know the difference just a hat can make,” she said. “Some people think ‘Oh, it’s just hats. What does that do?’ But, honestly, it’s so much more.”

Besides Relay for Life, the hats are also given to MD Anderson, Texas Children’s and local radiation and cancer centers.

You can donate materials including yarn, thread and needles to the B.A. Ritter Senior Citizen. If you know someone in need of a hat, contact Diane LaPoint at 409-727-5230 or Heather Kaiser at baritter.assitanthlk@yahoo.com.

Jefferson County’s Relay for Life takes place May 30 at the Beaumont Civic Center.