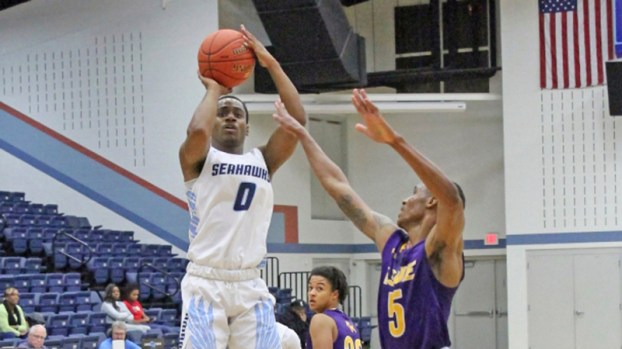 More in transition: Seahawks zero in on defense for improvement

The Lamar State Seahawks dug themselves into a hole on Saturday against Navarro College , head coach Lance Madison said.

“I think they hit eight 3-pointers in the first half, and we got down to a big hole by halftime and came out in the second half and regrouped,” Madison said. “We fought hard, cut it down to 11 points at one time, then they went back on a big run and we just got too far in the hole to really get out of it.”

Transition defense is what hurt the Seahawks, Madison and sophomore Jamyus Jones agreed.

“We could have done better, we need to play better transition defense because that’s where most of their points came from,” Jones said. “I think we did better rebounding-wise, but we could have been better on defense.”

The Seahawks came back home from Navarro with a 95-70 loss after traveling to play three of the four games that made up Lamar State’s busy first week of 2020, a week Madison thought might have taken a toll on the players on Saturday.

“I thought we were a little bit leg heavy and sluggish, and we gave up a lot of points in transition,” Madison said of the Navarro game. “Hats off to them, they shot the ball well and that was probably their best offensive game they’ve had of the year. We’ve got to defend better in transition.”

Jones, a Memorial High School graduate, led the Seahawks in scoring with 21 points, followed by Devaughn Thomas and J’Son Brooks each with 12. It was the first game since Pensacola State on Nov. 26 that Jones was the top scorer. Madison said Jones was finding his shots much better Saturday.

“I thought his shot selections were good, and he didn’t settle for just jump shots,” Madison said. “He actually put the ball on the floor and did some pull-up jump shots, which is one of his strengths. I think previous to that he took too many threes or took quick threes, and he let the offense come to him a little more at Navarro.”

“I felt more locked into the game and my shots were hitting so my teammates kept finding me,” Jones said of his performance. “I’ve been working on it to get it right back to how it was before. It just ended up working out that day.”

The noise didn’t help. Navarro College has a history of great turnout at its home games, Madison said, which tends to give the Bulldogs an advantage.

“It was very loud in there,” Jones said. “We could barely hear plays from each other. That took us out of our game. That was one of the best conference games I’ve played in, crowd-wise.”

The Seahawks will host Coastal Bend at 7 p.m.tonight, followed by another road game at 4 p.m. Saturday at Victoria College.

Coastal Bend is 7-10 this season, but they won their first conference game on Saturday against Panola College, who had defeated the Seahawks earlier.

“That was a big win for them,” Madison said. “I’m sure it gave them a big confidence boost and they’re going to come in here focused and ready to get a win. So we’ll have to play well. Their record may not show, but they’ve been good in just about every conference game they’ve played in and just fell short in a lot of the games. But they’re a fairly good team coming off of a big win, so I’m sure their confidence will be up and we’ll have to play well at home.”

Victoria is in the middle of their first year in the Region XIV conference, replacing San Jacinto College-Central after San Jacinto discontinued its athletic program. Saturday’s game at Victoria will be another road game for Lamar State, though Jones isn’t particularly worried about their new conference member.

“We played them last year, and last year they weren’t too good at all, like not close,” Jones said. “So if they’re anything like last year I don’t think that’ll be a close game.”

A common strategy used by the Memorial Titans’ opponents is to try to stop the Titans’ big men Nate Clover... read more