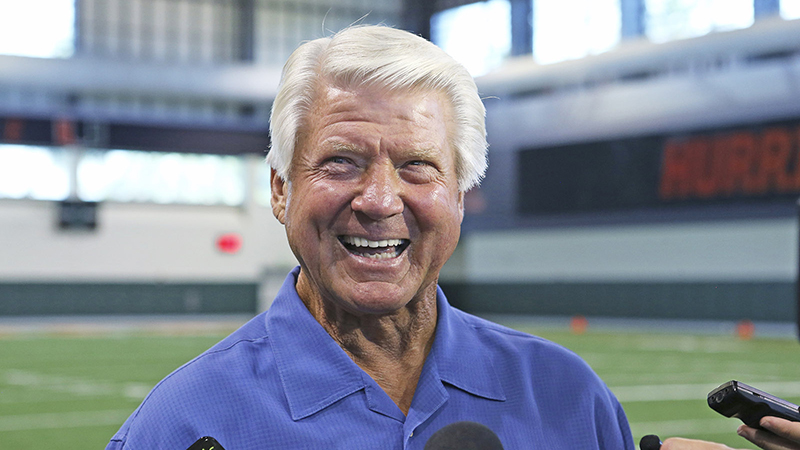 Once Jimmy Johnson found out his coaching contemporary Bill Cowher would be inducted into the Pro Football Hall of Fame, the Port Arthur native had a good feeling his name would be called next.

“I was thinking there was a chance I could get in,” the two-time Super Bowl-winning coach said via telephone Monday afternoon. “I was surprised when [Hall of Fame executive director] Dave Baker came in. I was overwhelmed with emotion.”

Johnson’s emotion was caught on-air during Fox’s halftime show of Sunday’s Seattle Seahawks at Green Bay Packers NFC division playoff. Baker announced Johnson as the 328th member of the Hall in the same fashion he announced Cowher, with a surprise visit from Baker on live television. 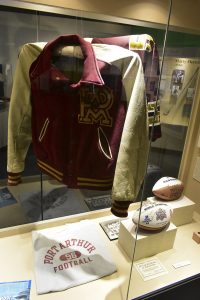 Jimmy Johnson’s letterjacket and jersey from Port Arthur’s Thomas Jefferson High School, along with commemorative footballs from his Super Bowl victories with the Dallas Cowboys, are stored at the Museum of the Gulf Coast in Port Arthur. (I.C. Murrell/The News) 1-13-20

“Thank you, Coach, for all you’ve done for the game. Thank you for all you’re going to do for the game. Thank you for the history that you made and the lives that you impacted,” Baker told Johnson on Sunday. “It’s my great honor to tell you that you’re going to be the 328th Hall of Famer into the Pro Football Hall of Fame. And your legacy is going to be in Canton, Ohio, forever.”

Johnson learned about Cowher’s announcement from one of his contacts and acknowledged New England Patriots coach Bill Belichick as someone who voted for him.

“Bill Belichick and I have a great relationship,” Johnson said. “He spoke on my behalf. I knew there was a good chance I had enough votes to get in.”

A panel of 25 coaches, reporters and contributors picked the 15 members who will make up the Centennial Slate of the Hall of Fame, the rest of which will be announced at 6 a.m. Central Wednesday on NFL Network. The Centennial Slate is named in honor of the NFL’s 100th season.

Five regular hall inductees will be selected Feb. 1, the day before the Super Bowl.

“I coached for about 40 years. As you know, for coaches, it’s a seven-day-a-week, 12-month-out-of-the-year job,” Johnson said. “I put so much into it for 40 years. At the end of the journey, being recognized is quite a thrill.”

It won’t be Johnson’s first time as a Hall of Famer. He is one of the original inductees into Port Arthur’s Museum of the Gulf Coast Hall of Fame, which opened in 1994, and he made the College Football Hall of Fame in 2012 for his success with the University of Miami, which includes the 1987 national championship.

Johnson joins Sid Gillman and Greasy Neale as coaches inducted into both the College and Pro Football halls.

A 1961 Thomas Jefferson High School graduate, Johnson led the Dallas Cowboys to Super Bowl championships in the 1992 and 1993 seasons. Johnson served on high school and college staffs for 14 years before Oklahoma State University named him head coach in 1979. He left after the 1983 season for the University of Miami and was Cowboys owner Jerry Jones’ first head coaching hire in 1989.

After Jones and Johnson mutually agreed to part ways following the 1993 seasons, Johnson returned to the sideline as the Miami Dolphins’ coach from 1996-99.

Johnson said playing under legendary high school coach Clarence “Buckshot” Underwood at TJ gave him a great foundation for his football career. But the secret to his success, Johnson said, begins with hard work.

“On top of that, surrounding myself with talented individuals, talented players, talented assistant coaches and people who had a talent for it and were willing to work for it,” Johnson said.

The entire Hall of Fame class of 2020 will be inducted Aug. 8 in Canton, Ohio. Johnson said he hasn’t started working on his induction speech just yet.

“There’s plenty of time for that,” he said. “I was fortunate enough that I presented [former Dolphins defensive end] Jason Taylor into the Hall of Fame [in 2017], so I know a little bit about how it works.”

WHERE ARE THEY NOW — Colton Weisbrod planning next…