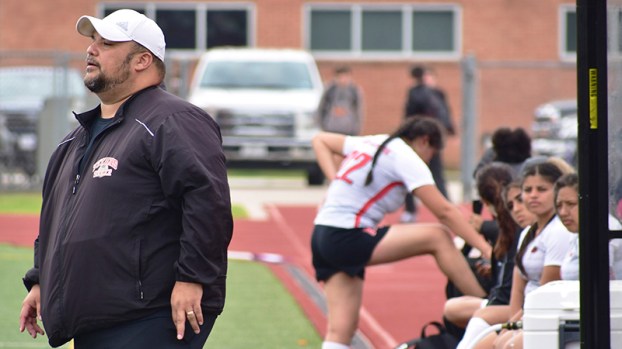 Daniel Garcia says he is rebuilding the Memorial Lady Titans from the ground up.

The Titans lost three senior midfielders and four defenders to graduation. One of the returning players, senior Guadalupe Contreras, suffered an injury and Garcia and the team don’t know how long she will be out. Contreras is a four-year starter and one of Memorial’s all-time leading scorers. Her sophomore year she was district co-utility player of the year and was first team all district her junior year.

In these circumstances, the Titans’ roster skews young.

“We’re super young,” Garcia said. “We’re probably going to have three freshmen starting on the field, probably three sophomores starting and then a couple of other juniors and seniors, so this year we’re starting off slow.”

Among those freshmen are three coming from middle school soccer programs Garcia began just last year. Alison Ortiz, Araceli Rizo and Nancy Mendoza have a lot of promise, Garcia says, and all three are starting midfielders.

To help bolster the ranks Garcia moved junior goalie Yanaris Castillo off of the goal and on to the field. He’s pleased so far with Castillo’s effort.

“We thought she would help us more in the field than in the goal, especially since we lost Guadalupe,” he said. “She’s really worked hard this off season, she’s been putting in a lot of work, and it’s showing, so we’re glad we made that move.”

The Lady Titans are 0-5-1 following Friday’s first-game loss to Waller in the Port Neches-Groves Cajun Classic. The focus for the season is building the young team’s experience and confidence.

“Really what we’re just trying to do is stay positive with them,” Garcia said. “I’ve been telling them at this point none of these games count until the last 12, which is district. So I don’t care if we win or lose. I just don’t want to see them quit, because they can kind of get down on themselves and it can fall apart. With these young girls, freshmen, that’s what we’ve been seeing actually.”

“We’ve got to be patient and we’ve got to keep working with them,” Garcia said. “At this point we can only get better, and that’s what we kind of keep in their heads. We’re getting better and I see it, because we’re just so inexperienced.

“We definitely need to work on chemistry. We’re so young. We still have girls who don’t know each other’s names. We’ve got to get this chemistry up. We’ve got to start knowing each other. These girls just haven’t been playing much with each other. It’s going to be a long season and we have our work cut out for us.”