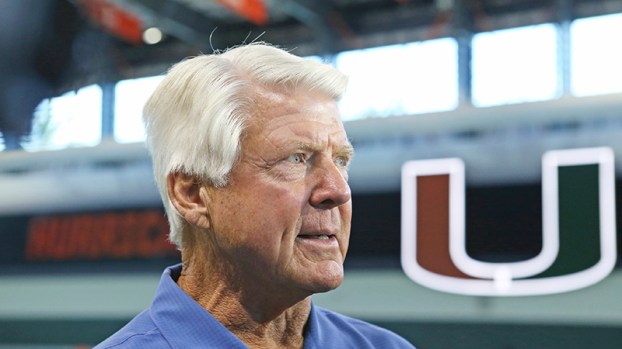 Port Arthur native Jimmy Johnson was overcome with emotion during halftime of the Seattle at Green Bay NFC division playoff Sunday upon learning that he was selected for induction into the Pro Football Hall of Fame. Johnson is a studio analyst for Fox, which broadcast the game.

Johnson is believed to be the first person from Port Arthur and surrounding areas to make the Hall of Fame.

Former @dallascowboys head coach @JimmyJohnson has been elected to the @ProFootballHOF as a member of the Class of 2020.

Incredible moment as he finds out he is now a Hall of Famer. #PFHOF20 (via @NFLonFOX) pic.twitter.com/EydJ1GDX8Y

“There’s nobody that’s from here that’s been at that level” that Johnson has reached in a football career, former Port Arthur News sports editor Bob West said. “I don’t think anyone from here has ever been nominated. If they have, their bio would include that they’re in the NFL Hall of Fame.”

“Thank you, Coach, for all you’ve done for the game. Thank you for all you’re going to do for the game. Thank you for the history that you made and the lives that you impacted,” Baker said to a visibly emotional Johnson. “It’s my great honor to tell you that you’re going to be the 328th Hall of Famer into the Pro Football Hall of Fame. And your legacy is going to be in Canton, Ohio, forever.”

One of Johnson’s fellow broadcasters, believed to be Terry Bradshaw, let out an audible “Whoa!” off-camera as soon as Baker said “328th.” Bradshaw exuded the most excitement over the announcement.

Other members of the studio crew burst out in celebration as Baker continued the sentence, and studio personalities including Curt Menefee, Howie Long, Tony Gonzalez, Michael Strahan, Bradshaw and Jay Glazer embraced Johnson. Bradshaw, Long, Gonzalez and Strahan are Hall of Famers.

“The only thing I can think of is, all the assistant coaches that have worked for me, all the great players that have played for me, they’re the reason I’m here,” Johnson said, gasping for breath. “I can’t talk. … This is so special to me, because when you put in the work that we put in, it’s nice to know people appreciate it.”

Johnson, 76, graduated from Thomas Jefferson High School, where he was a classmate of rock and roll legend Janis Joplin, in 1961. He won two Super Bowl titles as head coach of the Dallas Cowboys (1992 and 1993 seasons) and a national championship as a player (at the University of Arkansas in the 1964 season) and head coach (at the University of Miami in the 1987 season). Johnson, along his his Cowboys successor Barry Switzer and Seahawks coach Pete Carroll, are the only coaches to win major-college national and Super Bowl championships.

“We’re so happy that the Hall of Fame has recognized Jimmy Johnson for what he is: a great coach,” Cowboys owner and general manager Jerry Jones said in a statement that aired on Fox. Jones hired Johnson, his teammate at Arkansas, from Miami upon purchasing the Cowboys in 1989.

“To Jimmy, I say ‘The stars were aligned and our dreams came true when we joined the Dallas Cowboys.’

“And on behalf of the Cowboys, and our fans all over the world, I say congratulations Jimmy. We’re proud of you.”

Johnson’s legacy is also in Port Arthur. Jimmy Johnson Boulevard is named in his honor, and the coach also is a member of the Museum of the Gulf Coast Sports Hall of Fame.

Museum director Tom Neal said Johnson is a “shining example” of what someone from Port Arthur can aspire to accomplish.

“We’re proud of him and we’re looking forward to updating his display in the museum,” he said. The museum on Saturday held a book signing of Holly George-Warren’s Janis, Her Life and Music with Janis’ brother Michael in attendance.

Johnson and Cowher are the two coaches named as part of the Hall of Fame’s Centennial Slate in commemoration of the NFL’s 100th season. The Centennial Slate also includes 10 seniors (players who finished their careers more than 25 seasons ago), three contributors (individuals other than a player or coach), all of whom will be inducted along with five other persons into Canton on Aug. 8. NFL Network will reveal the rest of the Centennial Slate at 6 a.m. Central on Wednesday, with the last five members of the Class of 2020 to be selected Feb. 1, the day before the Super Bowl.

Colton Weisbrod learned something during one of the toughest years of his life in 2019: Whatever you think you’re doing,... read more