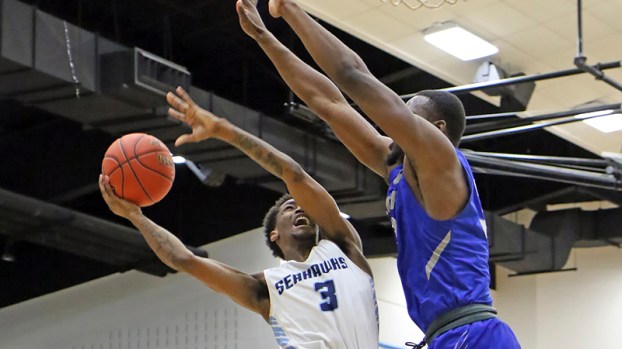 Ferontay Banks tries for a shot under pressure from a Kilgore defender during Saturday’s game at the Carl Parker Center. (Lamar State sports information)

Seahawks in for tough fight against Navarro College, their 4th game in 8 days

The Lamar State Seahawks are learning how to play as a team for the full 40 minutes.

Concerned about drops in focus that have cost the Seahawks possible wins in close games, head coach Lance Madison said his team bounced back from a lackluster performance in an 82-72 loss to Kilgore on Saturday and jelled to beat Paris Junior College 86-76 on Wednesday.

“I thought it was a good team win,” Madison said. “I thought the guys pulled together. We went into a hostile environment, were on the road, got off to a really good start and bounced back from a loss to Kilgore. I thought we engaged pretty much for 40 minutes and defense was really good. Our rebounding was better, we controlled the boards, so there’s a few areas we’ve improved.”

Kanntrell Burney stepped up his game, making four 3-pointers in the third quarter and totaling 17 points. Ferontay Banks added 13 points. Devaughn Thomas returned to form to lead the Seahawks with 28 points, 24 of which were made in the first half.

“I think Devaughn Thomas was a little disappointed in his effort in Kilgore, and then he came back against Paris and was a man among boys,” Madison said. “He controlled the boards, so it was good to see him back to his usual self.”

The victory was a group effort, Madison said, with better communication, awareness and focus.

Assistant coach Casey Apetrei said the team is starting to play hard for the whole game.

“I feel like we competed really hard on both ends of the floor, and that’s what we’ve been emphasizing to the guys, is competing at a high level, not taking plays off and being the harder playing team,” Apetrei said. “We did that and that’s all you can ask for.”

This will be a key factor when the Seahawks (8-9, 2-4 in Region XIV) hit the road to play at Navarro College on Saturday at 4 p.m. A road game at a school that plays especially well on their home turf will be a tough challenge after a three-game week, Madison said.

“It’ll be our fourth game in eight days, and Navarro is traditionally another challenging place to play,” he said. “It’s definitely a home court advantage for them. What’s good for us is students aren’t back in school yet, so they won’t have their student section back yet, but I’m sure it’ll be rocking.”

Navarro is 10-7 and 4-2 in Region XIV play. The Bulldogs are also led this year by Grant McMillan, who left for Navarro after serving as head coach at Panola for four years.

“He did an excellent job at Panola,” Madison said. “He’s got a good recruiter, he gets good players and he’s a good communicator. He’s one of the best coaches in NJCAA, so he’s had good success. He’s come from good programs. They won a national championship when he was an assistant at Northwest Florida.”

Lamar State will benefit from the experience playing a tough early season schedule, Madison said. He expects a good game on Saturday.

“It’s a rivalry,” he said. “Navarro and Lamar State have always been a good rivalry. There’s been good games. There’s talented players. Good coaches have been at both schools. It’s going to come down to effort, making plays and toughness. They’ve always been a toughness team and we just can’t let them out-toughen us.”

The Memorial Titans and Port Neches Groves-Indians each played great games on Tuesday, coaches said. Even though PNG fell to... read more