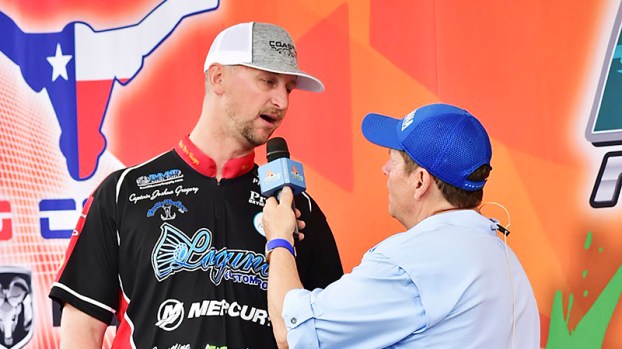 Angler Josh Gregory talks with Elite Redfish Series organizer and host Pat Malone about his first day in the series’ Border Wars tournament In April 2018 during weigh-ins at the Carl Parker Center. Gregory won the Port Arthur tournament that year after a three-day total of 53.21 pounds. (I.C. Murrell/The News)

The Port Arthur Convention and Visitors Bureau is once again be hosting an event for the Elite Redfish Series Tidewater Boats tournament in 2020, though not all of the details have been finalized.

The CVB is in the process of finding launch and weigh-in sites.

“Since this will be a team event, the possibility of an increased number of anglers, trucks and boats will come into play,” CVB sales and marketing director Callie Summerlin said. “For the launch, we are concerned with safety, convenience and space. As far as the weigh-in site, we are considering several different locations, including the Civic Center parking lot, which we’ve used in the past, and a few local restaurants. We are sure this will be our best event yet.”

The CVB declined to host the series in 2019 to focus instead on redesigning the CVB’s marketing assets such as the website, literature and local guides.

“We have received positive feedback, great traffic and even won two industry awards for our web and mobile sites,” Summerlin said.

Before last year, Port Arthur hosted the series going back as far as 2016.

“We have hosted several successful tournaments since then, from single man to team, open tournaments and even a kayak tournament,” Summerlin said. “So, it’s only natural that we’d keep bringing the program back to Port Arthur, where salt water fishing is king. Hosting another tournament was an easy decision, and we hope that the Visitors Bureau will continue to bring more tournaments and other water-related events to Port Arthur in the future.”

CVB Executive Director Tammy Kotzur said fishing is one of the major tourism markets the CVB highlights to promote tourism to the area.

“Port Arthur is home to outstanding redfish and flounder fishing,” Kotzur said. “Our own backyard is Sabine Lake, the Gulf of Mexico and the Sabine and Neches Rivers. Hosting a well known respected tournament adds credence to what is already known by local and regional anglers. The tournament director is able to offer social media coverage with live weigh-ins and tournament action. With the number of social media followers and the caliber of the anglers in the tournament conveying our incredible fishing, it is a win-win.”

Anglers interested in participating in the tour should visit theredfishseries.com/team-registration/ to register their teams. A team consists of two anglers and one alternate per boat. The costs to participate in a divisional event are $1,000 with an administration fee of $620 ($520 if paid before Feb. 1) to be paid at registration. Optional Big Bag and Angler Advantage side entries during the divisional events cost $250 each.

First place pays $15,000 at the divisional events and $5,000 for each Big Bag and Angler Advantage events. The first-place team at the Championship is awarded a Tidewater Boats-Yamaha Outboards-McClain Trailers $60,000 grand prize package, while first-place entries for the optional Big Bag or Angler Advantage competitions each receive $10,000. The Tidewater Boats Team of the Year will also receive a $60,000 grand prize package.

PORT NECHES — Kenneth Muller had what he and coach Chris Smith said was his best game ever Friday in... read more