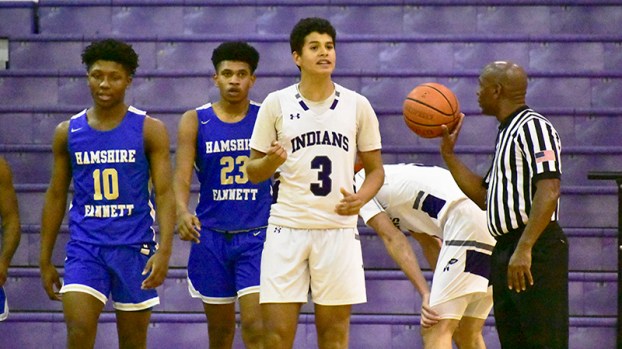 PNG’s Kenneth Muller has grown as a player, having perhaps his best game of his career against Dayton on Friday. (I.C. Murrell/The News)

PORT NECHES — Kenneth Muller had what he and coach Chris Smith said was his best game ever Friday in Port Neches-Groves’ district-opening 69-42 victory against Dayton.

“His stats were unbelievable,” Smith said. “It was his best game ever; I promise you that.”

What was unbelievable was that the junior scored 17 points and got four steals and one assist. He was 7 for 8 from the field, including and 3 of 4 from behind the 3-point line. For Muller’s breakout performance, he’s named The Port Arthur News Boys Player of the Week.

Muller got his start when he was 7, he believes, playing basketball with his father among lots of other sports.

He had a great freshman year, he says, which ended with a broken ankle and surgery and was followed by a great junior varsity year.

While he prefers basketball, he also plays soccer, which taught him how to see the playing field better, whether it’s a soccer or basketball.

“In soccer you have to know where you are at all times on the field,” Muller said. “So I really think the vision, whenever I played soccer, transferred over to basketball, allowing me to see the court in many different ways. I can see things other people can’t, finding players and finding open spots.”

Muller was quite pleased about his performance on Friday.

“I was having a good day that day,” Muller said. “I was feeling myself. I feel like, whenever I’m feeling myself, I’m one of the best people on the court, so it’s not just me. My teammates pass me the ball. They trust me, so that trust allows me to go do whatever I do every game. I feel like the Dayton game was one of my best games and I hope to have more of those games.”

Smith hopes so too, because the next game is against not just the Indians’ greatest rival, but also against a team Smith had been coaching only a year ago, and against a friend and mentor.

Nederland head coach Brian English says going against PNG is certainly going to be different, as this will be the first time the coaches have faced off since Smith left last year for the Indians. Smith, English says, knows nearly everything about the Bulldogs, but he’s got a few more tricks.

“I’ve done it before, but he was with us for a long time,” English said of Smith. “He’s good friend of mine. And I hate to see anybody lose, but somebody’s got to lose. That’s just part of it. Of course you add different things each year, but for the most part he knows us well.”

PNG will host Nederland at 7 tonight.

Smith is feeling the weight of the game against his old team, personally and through the rivalry.

“I’m a bit nervous, for multiple reasons, not just because of the game,” he said. “My first game against where I coached at, of course me and Coach English have been friends a long time, going against my mentor, so I’ve got a lot of mixed emotions, but the main one is just trying to go out there and get that win.”

Muller wants to repeat his performance from Friday, but getting the win is more important.

“I want to go in there and I want to win, no matter what, even if I have only two points,” he said. “If we win, I’m satisfied with that.”

Port Neches-Groves graduate Wade Phillips announced Monday on Twitter that the Los Angeles Rams would not renew his contract as... read more