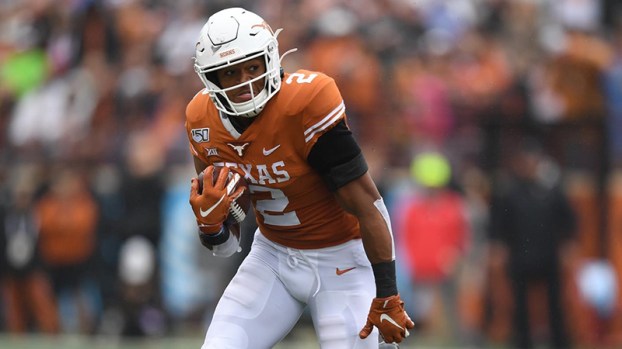 Roschon Johnson was a quarterback for Port Neches-Groves High School just one year ago, graduating early to become a Texas Longhorn in January 2019.

He was a pretty good quarterback, too. The recipient of The Port Arthur News Most Valuable Player designation — for three years in a row — was the Indians’ all time leading passer with 7,710 yards and he racked up 4,900 yards to be the school’s second all-time leading rusher.

The current true freshman at The University of Texas started there as a quarterback, too, until injuries required Johnson make a change and step up to play as a running back.

“With the situation right now (position switch), it’s been pretty crazy,” Johnson said. “It has been a very up-and-down journey, but it has been an incredible experience and helpful in my college journey. The big-game experiences have all been great, and playing in those games was good for me to get some reps in those games.”

Turns out Johnson’s no slouch as a running back either.

He’s played in the position since the season opener against Louisiana Tech, and wowed enough to be named the Big 12 Newcomer of the Week. Since then, across all 12 games he’s built up 649 rushing yards and seven touchdowns.

Against West Virginia, Johnson’s 121 yards were the most yards by a true freshman since 2015, and Johnson’s first 100-yard game.

“It was a big adjustment, but how we train and how we go about things on a day-to-day basis helps us prepare for any game, any scenario that we’re faced with,” Johnson said.

What made Johnson the stellar player he is today?

His time at PNG is fondly remembered and was a major influence on his development.

“My experience was filled with a lot of great memories and I had a lot of people that helped me get to this point,” he said. “It’s a great family atmosphere down there and it was a really good experience overall.”

In addition to football, Johnson ran track, though he always preferred football.

“Pretty much all the track coaches were football coaches ,as well,” Johnson said. It was just fun to be around my teammates. A lot of those guys ran track too. We had a lot of fun and made a lot of good memories at the meets and such.”

Austin became his destination after high school, because of the way the Texas Longhorns went about doing things sold Johnson on joining them.

“There were a bunch of things that went into it – just the people that are here and the culture that’s here,” he said. “And the city of Austin, I felt like it was just the best place for me. Coach [Tom] Herman and the staff were very honest with me and they told me what they thought I could do for them.”

He has family in Dallas as well.

“It’s always good to have family that I can go visit or that can come down to see me,” he said.

As well as he did for the Indians, Johnson freely admits that college football is a different, tougher creature, but the rigorous training helped prepare him to perform at the higher level.

“The most challenging aspect has been the attention to detail and the number of things, even little things, that you have to do on a day-to-day basis to stay successful,” he said. “It’s a challenge, but it’s fun because you’re doing it with your best friends and the team. We’re all in it together when we go to workouts and stuff. You’re working hard for your brother next to you, so that makes it a lot more fun.”

The work has also taught him that success comes from effort and discipline.

“There’s so many lessons that I’ve learned from football, but I would say the discipline required to be successful is something that stands out,” he said. “In order to achieve great success in something, you have to be disciplined in working toward that thing.”

His advice? Put forward the effort.

“Listen to your coaches, listen to your parents and work extremely hard at whatever you want to be,” he said. “Just keep God first and everything else will take care of itself.”

As the second half of the basketball season begins, District 21-5A teams are beginning to play for playoff spots. “District... read more