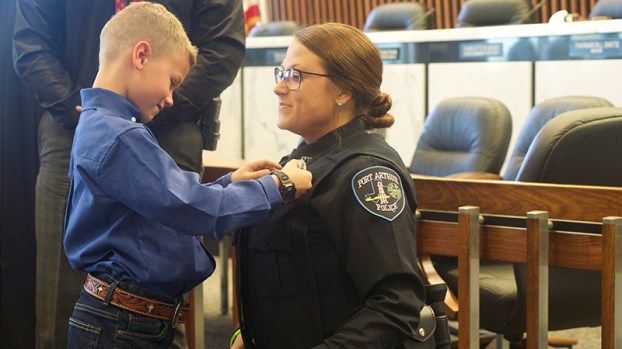 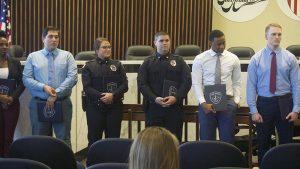 Chief of Police Timothy Duriso said the new additions continue to allow the Port Arthur Police Department to serve the citizens of the community.

“At one point, we were short on officers,” he said. “Now, we are trying to get back up to staff and what was done (Friday) allows us to do that. We’re still hiring, because we need to continue to recruit for those that will eventually retire but this brings us one step closer.”

Duriso said the most important part is to continue hiring knowledgeable and diverse people to serve Port Arthur.

“We expect professionalism in our officers, integrity and for them to be a people person who wants work in the community,” he said. “We expect a lot from them.”

Roberson, who is married with two children, was an EMT in 2010 before attending the police academy in 2014. He worked for Lamar University PD, achieving the rank of sergeant prior to joining PAPD. 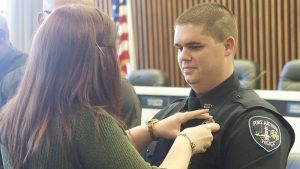 “Joining PAPD means a lot to me,” he said. “It’s always been my dream to be a police officer. I like helping people and I’ve always liked this area, so I finally get to come here and hopefully do some good.”

Roberson is looking forward to doing some community police work and meeting the people of the city.

VanWinkle, mother of 7-year-old son Cale, holds a bachelor’s degree from Lamar University in science, nutrition and hospitality management as well as a post-bachelorette degree in criminal justice from Sam Houston State.

“For the last year, I’ve been working through the police academy going through as an independent,” she said. “I put myself through the academy using law school financial aid to pay for it, so being able to swear in (Friday) and have a job where I’m getting a paycheck is really nice.”

VanWinkle previously worked as an adult probation officer for Jefferson County and as a claims specialist at the Provost Umphrey Law Firm. She is in the process of completing her master’s degree in law studies.

“I’ve been in the criminal justice system for awhile now,” she said. “This is something I am passionate about. Being able to get out there and serve the community, and be there for people during some of their worst moments, that’s what I want to do.” 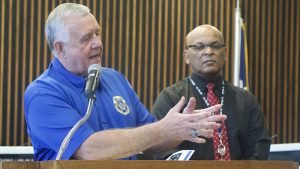 Owens left the new employees with a piece of advice — “remember, the job you do can mean so much. Something that can seem so minor is often life changing. This job isn’t about putting people in jail, it’s about serving the community.”

The Jefferson County Sheriff’s Office is seeking the public’s help in finding Javante Bailey, 26, of Port Arthur for the... read more