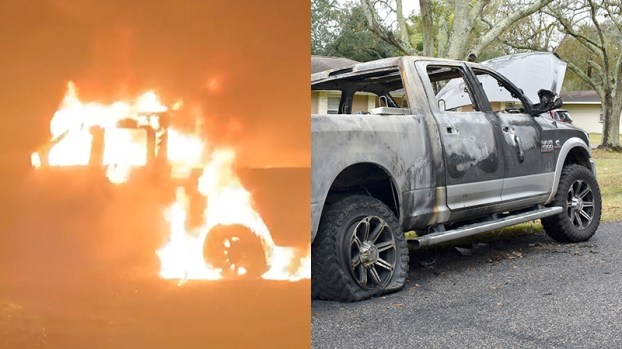 GROVES — A Groves neighborhood was jolted — not by fireworks but an explosion of a truck and subsequent fire just an hour into the new year.

Kelly Taylor was watching a movie when he heard a noise outside. He went to check but didn’t see anything out of the ordinary. Then came the explosion, he said.

“As soon as I opened the door the back rear passenger tire exploded,” Taylor said, describing the scene in the 2400 block of Crescent Drive.

The truck, a dark colored Dodge Ram 2500, was parked in front of his neighbor’s home while the neighbor, who had family in town to celebrate the new year, was in their back yard.

“This was not a normal fire. Somebody intentionally firebombed the truck,” Taylor said.

He described the sound as a “mini TPC” referring to the Nov. 27 explosion in nearby Port Neches.

The timing of the fire came during what Taylor called the crescendo with the fireworks and shooting of weapons.

“I definitely think this is something suspicious. It’s not normal,” he said, adding this isn’t an act of criminal mischief such as hitting a mailbox with a baseball bat. This is more serious — a terroristic act.

The tree-lined Crescent Drive is on a dead end road and has a traffic sign denoting this, as well as a highly visible sign asking individuals to report suspicious activity and giving the Groves Police Department phone number. At the end of the street is a large wooden fence separating Crescent Drive from Beverly Place Apartments.

Taylor said he has seen people drive to the end of the block to pick up people from the apartments. 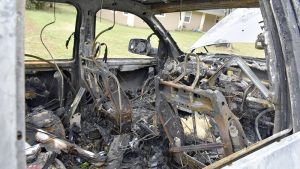 Metal and wires are all that remain inside a truck that was set on fire. (Mary Meaux/The News)

The burned truck was still in the same spot on Thursday where it was set ablaze. Black soot surrounded the vehicle and lumped together in the dampness of a recent rain. The vestige of an aluminum toolbox remained on the passenger side of the truck, closest to the street, while inside was a mix of metal and wires. A single door handle hung from one of the front doors of the four-door truck.

The owner of the truck did not return a call from The Port Arthur News.

“The main point is that this isn’t normal,” Taylor said. “(Criminals) have graduated from beer bottles and cans being thrown on the street to an explosion and massive fire and is something people need to be aware of. No. 1, our society has gone to the next level and you don’t want your neighbors two, three blocks over not know about these things. To me there should be the Federal Bureau of Investigation over there.”

Groves Assistant Fire Chief Kelly Moore went out on the call, which came in at 1:05 a.m. Wednesday.

“It’s still under investigation. We are investigating as we investigate every house fire and car fire,” Kelly Moore said. “We can’t reveal any of the details.”

There is no set timeline for the investigation. Sometimes they are easy and sometimes they take a little bit longer depending on when the information comes in to the department.

“Sometimes people come up with things days later or weeks later,” he said. “It all depends on timing and how willing people are to come forward.”

NEDERLAND — Brent Weaver dedicated his life to his community. The 52-year-old Nederland resident has been in the public eye... read more