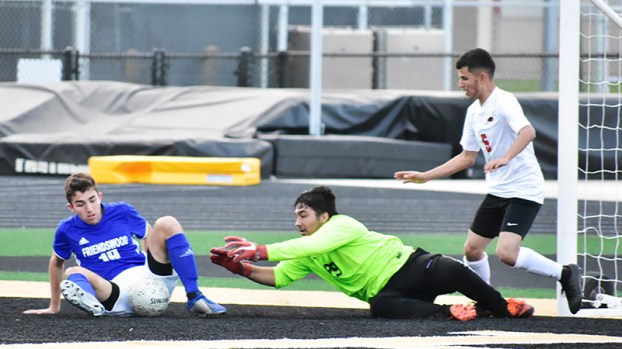 Ryan Sweeney of Friendswood tries to recover after Luis Rodriguez of Memorial saves a shot and Juan Lua of Memorial looks on in the second half March 29. (I.C. Murrell/The News)

It’s a new year with new turf for the Memorial Titans.

The players will be enjoying a turf soccer field located on campus, rather than at another location.

Titans head coach Chris Bradford says the new turf has a number of advantages, one of which is they no longer have to travel.

“That was a big deal for our school to get that because what we were having to do, like most schools, would be bus our kids to our stadium, which could be, depending on traffic, 20 minutes there and 20 minutes back in those prime times after school,” Bradford said.

While some coaches believe there’s little difference between turf and grass fields, Bradford notices the difference, especially after losing a game against Vidor on a very muddy field that he strongly felt the Titans should have won.

“On grass, the field conditions will change depending on how well the field is taken care of how or how muddy it may be that day,” he said. “The ball rolls better on turf. You need better control, and it’s definitely a lot bouncier, so kids have got to win their headers. We don’t want the ball bouncing over their heads, misjudging it.”

With the new field and a roster full seniors, Bradford is keeping an eye on the prize: going deeper into the playoffs.

Houston Wisdom knocked out Memorial in the second round last year after the Generals tied the Titans within the last 15 seconds of regulation and won in overtime.

“They just had a little bit more gas in their tank, and we knew we’d have a really hard time in overtime with them,” Bradford said. “It was definitely a good game. We were really close to the third round. That’s definitely a goal we have for this year.”
This year’s team is quite diverse, Bradford said.

“We’ve got a good bunch of kids coming from all over and we don’t have any kids that don’t like each other,” he said. “We have kids that all get along. One of our main goals at Memorial is to make good human beings to go out in the world and be respectable members of society. It should be a good year for us.”

Some of those newcomers are upperclassmen, which Bradford says he’s open to — giving a chance to see if they can acclimate to the team during preseason games.

“I created an environment that people want to be around, and we’ve had some kids that come later toward our program, and I let them see if they can work their way in,” he said.

Two of the Titans’ most promising players, Bradford says, are seniors Luis Rodriguez and Andrez Hernandez. Both returners, Bradford said he’s been coaching Rodriguez as a goalkeeper for three years. Hernandez was one of the team’s top scorers last season.

“Hernandez put us ahead in that second round against Wisdom, and we definitely look to him to lead us again,” Bradford said.

Play begins on Tuesday with a at 7:30 p.m. preseason game at Northshore.

Mollee Priddy put up a season high 29 points for the PNG Indians at the Brazosport Tournament over the weekend... read more