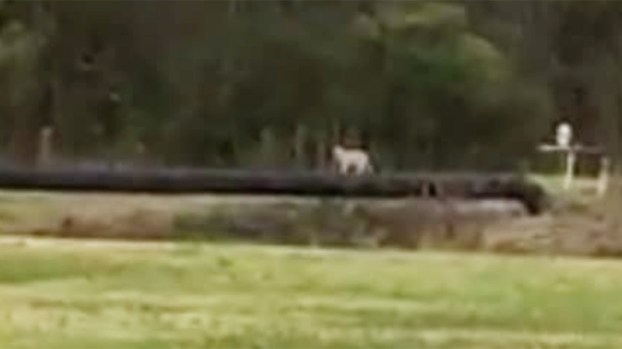 CASSANDRA JENKINS — Was a cougar or bobcat spotted in our area?

I was about 10 years old when I came face-to-face with one of the most common, but fiercest predators in the wild — a cougar. Of course, at the time, I lived on the outskirts of Las Vegas and was climbing the rocky slopes of the Red Rock Canyon during a family hiking day.

The cougar was in his natural habitat among the mountains, and in this case, I was the intruder. Luckily, the big cat was sleeping, burrowed back in a deep crevasse of the mountain outcropping. I was able to ease myself down from the cave and continue the hike unscathed.

Despite my brief encounter, I wasn’t too scared because I knew the wildlife was in his natural habitat where he belonged and posed no threat. However, that’s not always the case. Animals get loose, they wander to far from their homes and can end up in places they don’t belong.

This was the case for a possible cougar sighting in the El Vista area earlier this week.

A cougar, also known as a puma, mountain lion or panther, is the second largest cat in North America and common in areas of west and central Texas, but a rarity in East Texas.

Captain Ryan Hall, game warden for the Jefferson County district, said cougars are not native to the area, but bobcats can be.

“If somebody said they saw (a cougar), we would want to validate it and be called,” he said. “They are not native to East Texas. Of course, we’ve had calls about them in the past, but people mistake cougars for bobcats or large house cats all the time. A bobcat that doesn’t have spots and a long tail can look like a cougar to someone who doesn’t know any better.”

Hull said without proper evidence such as a video, photo or animal tracks, he urges the community to not jump to conclusions.

“We need validation,” he said. “Most people don’t have experience with the large mountain cat, so they may jump to conclusions but if someone is sure and has photographic evidence, they should contact us so we can verify that information for them.”

The Texas Parks and Wildlife Department urges precaution with contact of any wild animals, especially if the identity is unknown.

“It is a wild animal,” Hall said. “State law doesn’t protect them. Citizens are welcome to take that animal if they have a hunting license. Some may just want to watch them, but should keep a safe distance.

“I’ve been in states where there is a healthy population of cougars, so as long as people give them their space, they are a very reclusive animal. They don’t mess with people but can be very destructive on farm animals and critters like that. If one of those showed up in an area like that, we would definitely want to try and get that animal out of there.”

Hull said he wants to stress to the community that a cougar sighting in Southeast Texas is extremely unlikely, but citizens should contact the Parks and Wildlife Department in Beaumont at 409-892-8666 if they need assistance with any wild animals or have additional questions.

Jody Holton: Tips to stay fit during the winter

BRRRRR, here we are smack dab in the middle of winter. All you want to do is hibernate in your... read more