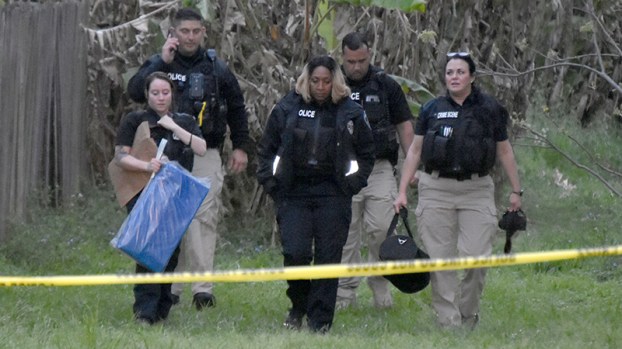 Port Arthur police and crime scene investigators return from the site where a body was discovered in an alley in the 1000 block of Delaware Drive in April 2019. The deceased was identified as Javier Palacios, 22. (Mary Meaux/The News)

8 homicides were reported in Port Arthur in 2019; Nederland had 1

Authorities in Port Neches and Groves did not report any killings in 2019.

Port Arthur’s 2019 homicide total is a substantial drop from the previous year when 14 lives were lost to violence.

Some of the homicides — categorized as the deliberate and unlawful killing of one person by another — have led to arrests while others remain unsolved.

Here’s a look at the victims:

The accused is her boyfriend Daniel Shackelford, 34, of Port Arthur, who remains in jail on a $500,000 bond.

Court documents show Shackelford called 911 to his home on Birch Street, saying he came home and found Gonzalez down with a television on top of her. But police said her injuries were consistent with an assault. An autopsy showed she died from blunt force trauma to the head.

Public information provided from police has been sparse. Authorities speculate there were at least two other people at the apartment during the shooting but still have not released whether they believe the shooting was accidental or intentional. Earlier this year a detective with the Port Arthur Police Department said they were waiting for the ballistics report connected to the case.

Gilliam suffered a gunshot wound to the abdomen and was brought to St. Elizabeth Hospital in Beaumont but died shortly after arrival.

Police knew Palacios had friends and enemies, and in a press conference in late March announced they were searching for him and had hoped to capture him for the sake of the citizens and for his own safety.

There have been no arrests in the case as of late December.

Ashton Jherimiah Robertson, 21, was charged with tampering with physical evidence because he reportedly removed evidence from the crime scene. Police do not believe the victim knew Robertson.

Early reports showed the call came in as a possible drive-by shooting but was later discerned to be an armed robbery. Police at the scene were told two men approached a man at the back of a home and demanded money. Another man came outside the home and was also confronted.

During the altercation the man that was first confronted — Martinez — was shot while trying to flee and the other man who had stepped outside the home was struck with a pistol and suffered non-life threatening injuries.

Martinez was brought to a local hospital, where he died.

In early August police released information saying a 2012 black Nissan Altima with paper tags was last seen leaving the area after the killing and there were at least two black males inside. Police said the vehicle frequents the Stonegate Apartments on Turtle Creek Drive.

No arrests have been made as of late December.

The case appeared odd from the beginning — police received a call that Kelli Sartin had made alarming statements about her father’s welfare and when police arrived she was there. She told police she had found her father dead and he had committed suicide by hitting himself with a metal spatula and a wooden rolling pin on Sept. 4.

Inside the home the victim’s body was found wrapped in bedding and a tarp in the bedroom. The daughter said she thoroughly cleaned the home with bleach and taped the bedroom door shut with duct tape, according to court documents.

Jefferson County Assistant District Attorney Cory Kneeland said it is believed the victim had been dead for four-and-a-half days before police arrived.

The victim’s body had wounds on the head and upper torso that appeared consistent with blunt force.

Kelli Sartin later made a statement to police about her father’s death before being taken to county lockup that same day, arrested for murder.

She was later indicated for the crime. An indictment is not a final conviction of guilt; it is only a ruling by the grand jury that allows the district attorney’s office to proceed with a criminal case.

Security video from neighboring Motiva shows Thibo riding down Savannah, crossing over 25th Street and continuing toward the highway but he never made it.

The truck that hit him can be seen pulling over and the driver getting out to survey damage. Police believe he knew he had hit a person but instead left the scene and the body of Thibo behind.

The suspect’s vehicle was ditched and found abandoned at Timber Creek Apartments.

Police at the time were searching for Charles Nicholas Lock, 32, on a probation violation. Lock is also a person of interest in the fatal hit and run of Thibo.

Police said Newman was an innocent bystander and a mother of two. She had no police record.

A 2015 graduate of Memorial High School, Newman had goals for the future. She wanted to work as a prison guard to provide more for her children.

At the height of the party she was attending there were up to 50 people in attendance, and by the time the shooting occurred only seven were standing outside getting ready to leave.

Nederland suffered one homicide in 2019 — the shooting death of Joshua Caleb Miller, 34, at Briarcliff Apartments on May 29.

Nederland police were called to the complex about an altercation that night and found the victim dead from a gunshot wound to the back.

According to police, witnesses saw three men go into an apartment at about 6 p.m., an argument broke out and one of the men went back outside and got a gun from a car and went back in. After that neighbor reportedly heard a gunshot, all three men left the apartment.

Jonathan Loya, then 20, turned himself in to police. He was later indicted by a Jefferson County grand jury.

If you have information about any of these crimes you may call the Port Arthur Police Department at 983-8600 or Crime Stoppers of Southeast Texas at 409-833-TIPS. You won’t be asked your name and you may be eligible for a cash reward. You can also make an anonymous tip to Crime Stoppers by downloading the P3 Tips app on your smartphone.

The IBN Sina Medical Clinic is partnering with The Rose, a non-profit breast cancer organization, for a Mobile Mammography Day... read more