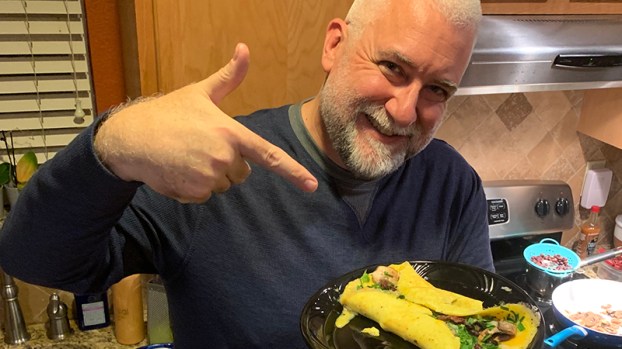 Photographer Jerome Cabeen and a made-to-order omelet. (Darragh Castillo/Special to The News)

The Eggs-istential Omelet Party just happened. Based on Dictionary.com’s 2019 word of the year, “existential,” it followed the previous week’s Ad- vent/Christmas/Solstice Omelet Party.

Here’s what happened at “Eggs: The Sequel.”

Our culinary good fortune continued when photographer Jerome Cabeen prepared his famous multi-cheese omelets. Back in the day, he’d throw in seafood or meats, but he did his vegetarian spread before a party of 10.

This was just one week following musician Paul Thomas’ one-skillet creation that became a high-rise frittata more than the omelets we kept calling them that night. Sooooo good.

Cabeen’s method is to go individual, so we kept hearing “NEXT!” as diners queued up for their plated masterpiece.

Jerome brought his own pan and spatula, chipotle cream he whipped up and olive oil.

I thought the cheese list would be the easiest aisle of the mission, but I had to get help spotting the gruyere and gouda. Sharp cheddar was easy, but then I required assistance as the Swiss had to be cut behind the counter.

The same went for the loaf.

Sourdough Rye was not to be found, but bakery employees went to the kitchen to fetch an un-sliced sourdough. I also grabbed a loaf of French, just in case.

So with a cart overflowing with vegetables, red and white wine and the above-mentioned groceries, I proceeded to check out and made conversation with the bagger that someone was coming to my home to prepare eggs.

I forgot the eggs.

The most basic omelet ingredient was still on the shelf when my husband was calling for me to pick him up down the road.

When I went to a second store for four-dozen brown cage-free eggs, I did locate a sourdough rye. Game on.

The cook was at the stove all night and I didn’t even see that he ate one, but he did. His artistic side showed as he went for a harmony of composition with each creation. I asked for everything but the beans, because I wanted to have room for some of that bread.

Guests also arrived with everything from homemade peach jam and pickled tomatoes to light up flamingos, guitar music, Catholic prayer and Hanukah song. What a joy.

I felt somewhat guilty calling myself a “hostess” while others were prepping and cooking, but not so much that I couldn’t do it again.

Thanks to Paul and Jerome for two lovely evenings.

Anybody available to make this a trilogy?

Darragh Doiron is a Port Arthur area foodie thankful for friends and celebrations. She’s wishing you the best of your 2020. Email her at darraghcastillo@icloud.com.

STEPHEN HEMELT — Stay true to yourself with exercise resolutions

We are mere days away from 2020. Many of us in Port Arthur and Mid-County will likely take advantage of... read more