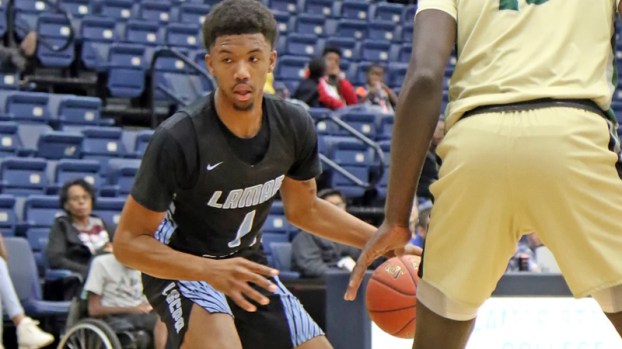 Devaughn Thomas plays in the Dec. 7 game against Panola College. Panola won 85-52. Thomas says it’s up to the team to get back in playing shape before restarting conference against Trinity Valley on Jan. 3. (Lamar State sports information)

A long break will leave any team rusty.

The Lamar State College Port Arthur Seahawks brought life to the Carl Parker Center on a campus still closed for the holidays Friday as they began practicing for their New Year’s Classic today and Tuesday.

“Normally you come back and you’re focused, rested and a little rejuvenated for the second part of the season,” head coach Lance Madison said. “We think we’ve been off for about 20 days, and basketball is a game of rhythm. We’ve got to get our rhythm back and our timing back and right now we’re trying to get back into basketball shape.”

Devaughn Thomas, who leads the Seahawks in scoring with 16.2 points per game, said playing in the classic last year was a learning experience.

“It was my first time in college coming from a break like that to play, so you take a couple of days off,” Thomas said. “You’ve got to work to get back in shape, and playing two teams that are going to definitely help us do that and get ready for the second half of conference. I feel like this is a great tournament for us to go into to get two quality wins and start us back on the right track.”

That was the onus behind the creation of the tournament in the first place: to get in a couple more games after the break before Region XIV play starts back up.

“It’s a tournament that when I got here, me and athletic director Scott Street put together,” Madison said. “Having such a long break in between semesters, we decided to come up with a tournament to get a couple games under our belt before we start conference again. It’s been a useful tool for us.”

It’s going to be necessary, too. The Seahawks are 4-8 and 0-3 against Region XIV opponents. Lamar State will get a few days to breathe after the tournament before traveling to Trinity Valley for its next conference game on Friday.

Madison knew his schedule was tough, and that was by design.

“I don’t think people realize the caliber of schedule we have,” he said. “I challenge these guys and I knew it was a tough schedule when I put it together. I was looking at it the other day and I saw that currently there were four teams that were ranked in the top 20 that we’ve played on our schedule. We had opportunities to win a couple of games that were right there at the end and we just didn’t make the play to win it against some ranked opponents. But that’s how it is in college basketball. You’ve got to bring it every night and sometimes you’ve got to make a play late, or the ball bounces your way and you end up on the positive end of it.”

Thomas says one of the things the Seahawks can do is make sure to play a full game of basketball.

“We get too relaxed when we have a lead,” he said. “We’ve got to keep our foot on their necks and keep the intensity up so we can close our games with a strong win.”

Taking two wins with them to Trinity Valley will be a boost to their confidence, but the team needs to be rust-free to earn them.

“We’ve been off this many days. If you don’t bring your A-game, you can get beat on any given day,” Madison said. “I’m sure early on it won’t be as pretty. I’m sure we’ll have a bunch of turnovers and some bad passes and some bad executions. Hopefully we’ll get two games and get better, and by the time comes around on Friday for our conference game we’ll be prepared to play at a high level.”

Thomas knows it’s all up to how he and the team plays.

“It’s on us,” he said. “It’s on the team. You’ve got to get locked in and focus, and get rid of all the remainder of the season. It’s all or nothing right now.”