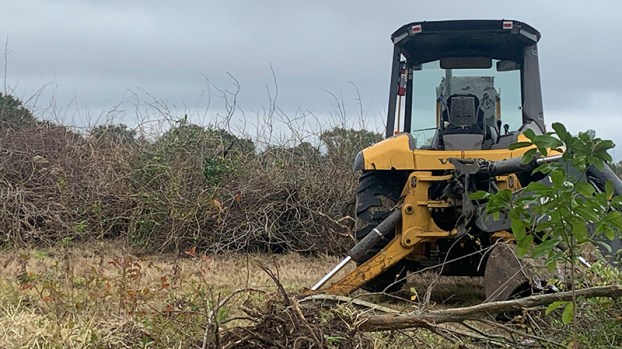 While LLB Construction LLC awaits final approval of its master plan to begin the construction of up to 100 homes along the Port Neches riverfront, the company has begun site clearance by cutting down trees, removing asphalt and tearing down a fence. (Cassandra Jenkins/The News)

PORT NECHES — Port Neches is growing, and the city has plans to accommodate its influx of residents.

In July, Dinh Nguyen of LLB Construction LLC was approved for a $1.8 million bid for 31.9 acres of riverfront property at the corner of Block Street and Lee Avenue.

The land was officially handed over to LLB Construction LLC two weeks ago.

“We are currently doing the site clearance right now,” Nguyen said. “We are clearing everything out, which will take three to four weeks to cut the trees, remove the asphalt, take all the old light poles down and remove the fence.”

After clearing the land, Nguyen said the next step is to submit the master plans to the City of Port Neches for approval — an approval developers are hoping to gain in the early New Year. 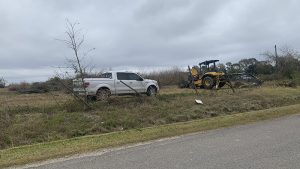 In July, Dinh Nguyen of LLB Construction was approved for a $1.8 million bid for 31.9 acres of riverfront property at the corner of Block Street and Lee Avenue. The land was officially handed over two weeks ago and officials are hoping to break ground by March or April 2020. (Cassandra Jenkins/The News)

“Once the plan is approved we will begin infrastructure, putting in sewer lines, water lines, electrical, cable and gas,” he said. “The infrastructure is very complex, and we have a lot of people involved in this project like engineers and bank holders.”

“We are hoping to submit our master plan after the New Year, as soon as the 2nd or the 3rd of January,” he said. “The land is officially ours now. We already paid for it, we just have to go over the final details.”

“People are trying to purchase lots already,” he said. “We have at least 25 residents already committed to these lots. They are on the list, but we haven’t actually sold any yet.” 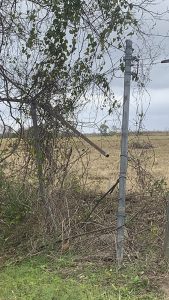 LLB Construction LLC was approved for a $1.8 million bid for 31.9 acres of Port Neches riverfront property at the corner of Block Street and Lee Avenue. The land was officially handed over from the city two weeks ago, prompting site work starting with tearing down an outer fence. (Cassandra Jenkins/The News)

“A lot of people are taking out old houses and putting in new ones,” he said. “Last year we had 45 (new homes) and we are well over that this year, so there are quite a lot of people who want to move to Port Neches. This housing development will help build a customer base for the potential business development, as well.”

“The city runs off of property taxes,” he said. “This will help the city in more ways than one.”

It has been an eventful year for the folks at Port Neches-groves Independent School District. The rollercoaster has included the... read more