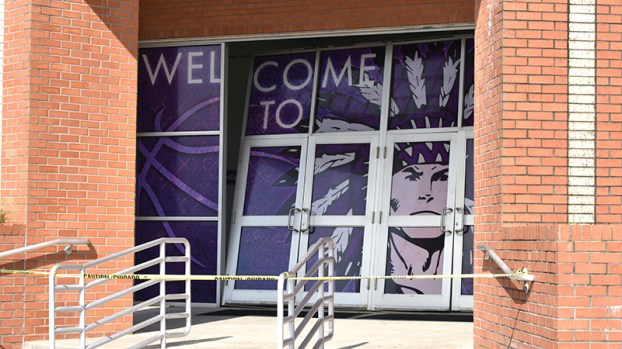 Doors to one of the gyms at Port Neches-Groves High School were blown off track after the explosion at nearby TPC Group on Nov. 27. (Mary Meaux/The News)

It has been an eventful year for the folks at Port Neches-groves Independent School District.

The rollercoaster has included the passing of a $130 million bond to build new elementary schools and two explosions at an industrial site that led to sheltering in place, subsequent evacuations and closure of schools.

It also included a ransomware attack, the passing of a fiscal year budget with a 7.5% raise built and successful academic, athletic and music strides.

PNG Superintendent Mike Gonzales summed it up in his own words.

“It’s hard to believe that any school district would need to overcome so many challenges in the first half of a school year,” Gonzales said in a written statement. “However, I am not surprised at the resilience of our students, staff and community. The foundation of PNG’s Honor, Pride and Tradition is firmly established and deeply rooted in this community.

“With the support of the Groves and Port Neches communities, PNGISD will continue to overcome obstacles and create a strong foundation for the students and staff who make us great. We are looking forward to continued success in the year 2020. We are PNG PROUD.”

“It’s a very exciting time for our community, for our kids, teachers and parents,” Gauthier said.

The district plans to hire an architect in January for construction of the third-to-fifth-grade campuses.

The Pre-K-to-second-grade campuses will be built after the third-to-fifth-grade schools.

On the eve of Thanksgiving — Nov. 27, an explosion occurred near 1 a.m. at the TPC Group facility in Port Neches, very near the high school. Emergency officials called for the evacuation of people in a four-mile radius of the facility and a curfew put in place. Another boom occurred just before 2 p.m. that day.

The explosions happened while school was out for the Thanksgiving holidays and people returned home several days later.

All seemed well until Dec. 4 when a shelter in place, then a voluntary evacuation was issued for Port Neches due to elevated levels for 1,3-butadiene.

Officials with the school district canceled classes for the rest of the week as a precaution.

“We were lucky our administrative staff, along with Jeff Bergeron and the maintenance department were very much on top of it and quick to get the insurance on board and structural engineers within 24 hours of the actual event,” PNGISD Board President Scott Bartlett said.

The high school suffered damage during TPC’s blast, as well as municipal buildings, businesses and homes.

The district hired Signature Group, which got the buildings ready for students and staff to return as fast as possible, Bartlett added.

About two weeks before the TPC explosion the district was busy dealing with a ransomware attack. And while the data held hostage or encrypted was of no value to the “cyber pirates,” as Bartlett called them, it was very important to the district itself.

“They were looking for a fast payday,” he said.

“The (district’s) insurance company stepped in, and we paid our deductible and the insurance was able to negotiate with the cyber pirates. Once it was negotiated, they sent the key.”

Yet even with the key, the system didn’t automatically return to normal. The district’s technology team and an outside system worked together to restore data, rebuild the system and bring it online with more fail safes to prevent this from happening again.

Trustees with PNGISD did something they’ve never done before — give their employees at 7.5 percent raise thanks in part to the school finance overhaul approved by the state legislature.

The total cost of the raises, according to an archive story, was $2.5 million. Texas Education Agency put in about $1.86 million, leaving the district with just over $638,000 to pay.

This school year marked Gauthier’s second in the assistant superintendent role and 21st in education, leading to a fall semester like never before.

“I’ve trained for a lot of things with best practices, but I am not trained for ransomware and explosions. You draw on your leadership training to make good decisions quickly and always have what is best in mind for the students, teachers and community,” she said.

“It’s incredible, the community in Port Neches and Groves was able to make it through the semester with so many difficulties. Teachers kept on teaching — and so many great things happened in Port Neches-Groves ISD.”

Another upcoming holiday week means changes in the regular collections of garbage. If you’re still looking to dispose of ribbons,... read more