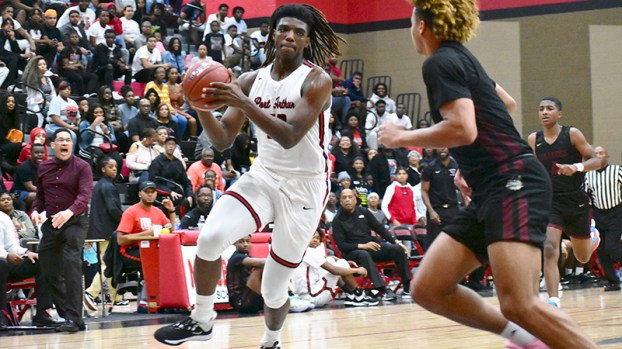 Lewis and his 5A eighth-ranked Titans won the program’s ninth Gamble Classic championship and fourth in a row after knocking off Coleman’s 6A second-ranked Summer Creek Bulldogs 75-52 Saturday evening. It marks the 17th time in the tournament’s 27-year history a team from Port Arthur has won its home tournament, as Lincoln won eight of the first nine titles.

This time, Lewis — who was on the first Titans team under Green as a senior in the 2002-03 season — topped fellow Port Arthur native Coleman, the man under whom Lewis served as first varsity assistant for three years (2015-18).

“My guys played hard,” Lewis said. “They competed. They went out and played well. They played well all the way to the end. That’s what we wanted to do.”

“Coach Coleman, he’s a great coach and they like to press, and we just had to overcome that,” Clover said. “I couldn’t do it without my teammates.”

Landin Jackson scored 11 of his 17 points for the Titans in the second quarter, and Louisiana Tech commit Kenneth Lofton Jr., playing through a cramp in his left leg for much of the second half, totaled 15 points.

“It helped Junior and me to get our touches a lot,” Clover said.

Memorial never trailed in the championship game, jumping to a 12-3 lead within the game’s first three minutes. The Titans connected on all six of its 3-point baskets in the first half, going into the locker room with a 40-31 lead.

Summer Creek (18-4) never got closer than within 54-48 late in the third period. Clover scored back-to-back layups as part of a 6-2 run in the final minute to put Memorial ahead 58-48.

Memorial will begin District 21-5A play Jan. 3 at home against Barbers Hill. Those two teams shared the district title last season, with Barbers Hill earning the No. 1 playoff seed in a tiebreaker.

Prodigal coach: Kenneth Coleman says “my heart is always going to be with Port Arthur”

Kenneth Coleman has a message to Memorial High School, its students, coaches, parents, teachers and the whole community. The coach... read more