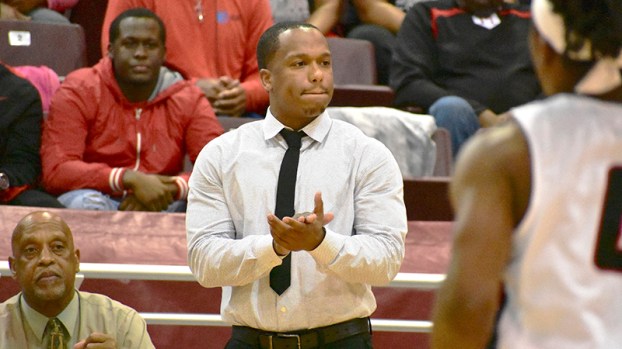 Friday’s games (All in Competition Gym)

“I think we had a great first day for the tournament,” Memorial head coach Alden Lewis said. “Teams came down and competed. We’ve got some good games coming for today. We look forward to a great day.”

The Titans played Houston Madison at 7:30 p.m. Friday, the last game of the night. Madison opted not to play in the pool games on Thursday, and came in on Friday as ranked fourth for Pool C. They started tournament play on Friday defeating Houston Kashmere in Game 1. Memorial dominated Pool A, beating St. Pius 56-40 and Katy Mayde Creek 58-50 later Thursday.

Despite their wins, Lewis saw some rust his Titans needed to knock off after the five-day holiday break.

“Like I told my kids, there’s going to be some rust,” he said. “Let’s just get back to playing basketball and do the things you’re coached to do, and I think we’re doing that. We’ve just got to get back with our energy and effort.”

What carried the sluggish Memorial squad on Thursday was a bout of good defense, Lewis said.

“When you play good defense that can carry over any day,” he said. “You might not hit all the shots, you may turn over the ball but that defense can carry over. I think if we add a little more energy and effort, we can take it to the next level in the tournament and hopefully win it. I told my team, ‘We haven’t been practicing a lot because we’ve been playing a lot, but we’re going to have to play better than what we played yesterday,’ and I think they understood that message. “I look forward to them stepping up to the challenge and playing better and taking it game by game.”

Lewis says he’s seen good things from Bellaire during its game with Summer Creek on Thursday, which Summer Creek won 60-56, and West Brook and Westbury Christian a good, and especially close, game towards the end of the day, with West Brook coming out on top 62-60. He expects all the teams to be making a run on the other side of the bracket to get into the championship game Saturday at 5:30 p.m.

Lewis is looking forward to playing whoever ends up being on the other side of the court.

“I’m not going to give a particular name, because there are several teams that are pretty good. We can give them a challenge and they can give us a challenge. As long as we keep winning, whoever will show in and we’ll have to play in that championship game if we’re fortunate enough to get there,” he said. “But we’ve got to take care of business. It’s just one game at a time.”

If Memorial won against Madison on Friday, they will play in Game 10 the winner of Game 3 at 1 p.m. on Saturday, either Westbury Christian or Bellaire. If they lost, they’ll play in Game 13 for fifth place against the loser of game Game 5, which was between West Brook and Houston Austin or Mayde Creek, at 2:30 p.m. Saturday.

Winning Game 10 puts the Titans in the championship game at 5:30 p.m. A loss would have Memorial play for third place at 4 p.m.

James Gamble glad to do what he can for Titans, tournament that bears his name