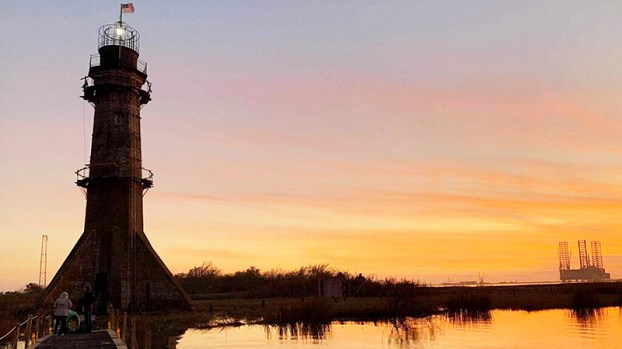 Patti O’Brien Bobbitt viewed the relighting ceremony of the Sabine Pass Lighthouse Dec. 13. For her and her family, the significant event was a glimpse into their past as they were reminded of a great grandfather and grandmother who used to be keepers of the lighthouse. (Photo Courtesy of Patti O’Brien Bobbitt)

SABINE PASS — The historic 1856 Sabine Pass Lighthouse lit the night sky for the first time since 1952 during a relighting event Dec. 13-14.

Dozens of families gathered on the Louisiana-Texas border to catch a glimpse of history being remade as the LED light pierced through thick fog to be seen by land, sky and sea. The event was a touchstone connecting today with the past and a possible indicator of what’s to come.

Andrew Tingler, a volunteer from the Cameron Preservation Alliance group in charge of the restoration process, said the response from the community was overwhelming.

“It felt good,” he said. “It’s good to see that the people still care about (the lighthouse) even after it’s been abandoned and marked for decades.”

Tingler said the reaction from the lighting ceremony was larger than expected.

“I think it means a lot to a lot of people,” he said. “It’s something that is unique to our area and is one of the only lighthouses left in the country. It’s what makes our area unique, and it is good to see it starting to make a slow comeback.”

The lighting ceremony was a one-time event and those lucky enough to witness history said it was a sight to see.

“I’m 53 years old and I’ve never seen a lighthouse lit before,” said Staci Poore Quick of Vidor resident. “I was awe struck honestly. You look at modern technology and how ships travel with radar and sonar and to think that is what guided ships safely coming into a port over a century ago is a testament to how far we’ve progressed.”

For Patti O’Brien Bobbitt, the historical landmark isn’t just a beautiful testament to history, but a piece to her past.

“I attended the lighting in support of my cousin, Robin Anderson, who was asked to flip the switch illuminating the lighthouse,” the Nederland native said. “Our great grandfather was a keeper there, and our grandmother and her sisters lived there in the keeper’s house, which is no longer there.

“So besides having that personal connection, I firmly believe that if we let our history slip away, letting it crumble to ruin, then we lose the ability to pass on the importance of what that light meant to early maritime interest. We also lose the heritage that we should be passing on to our future generations — that is a terrible loss that cannot be replaced.”

The lighthouse outreach even touched beyond the local community, resounding all the way to the east coast.

Josh Liller, a Historian and Collections Manager at the Jupiter Inlet Lighthouse and Museum from Florida said he is pleased to see another lighthouse being saved.

“Sabine Pass has a rare, probably unique design,” he said. “I don’t know of any other brick lighthouses with buttresses around the base. Surviving Gulf Coast lighthouses are also few in number, and people aren’t as aware of them as New England or the Great Lakes.”

Members of the Cameron Preservation Alliance want to thank everyone who donated to the cause and has become a part of fighting for history.

The restoration process is set to go well into January, but Tingler said there are hopes to provide up-close access in the future.

“The condition of the road is bad, but we are hoping to improve the road this summer to have limited access again, but it is going to take awhile,” Tingler said. “I’m glad that everyone enjoyed the lighting and I wish we could return it to service faster. It’s going to be a large drawn out battle, but our hopes are high.”

A “Save the Sabine Pass Lighthouse” GoFundMe account has also been set up to help accumulate donations for a complete restoration.

Voters will see 10 proposed constitutional amendments on their ballots for the Nov. 5 election, including propositions on retiring law... read more