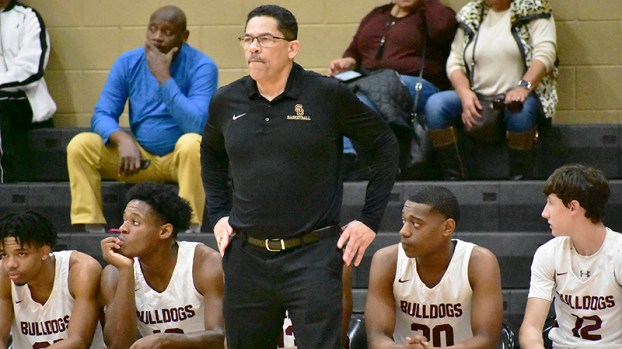 Prodigal coach: Kenneth Coleman says “my heart is always going to be with Port Arthur”

Friday’s games (All in Competition Gym)

Kenneth Coleman has a message to Memorial High School, its students, coaches, parents, teachers and the whole community.

The coach who lead the Titans to a 5A state championship in 2018 always thinks of Port Arthur, the place where he was born and raised, as his home, and he’s excited to be back coaching in the James Gamble Classic with the Summer Creek Bulldogs, his team for the past two years.

“Port Arthur is a place that I’m going to always love,” Coleman said. “God blessed me with the opportunity to go be with my family at a school that was close to where I live, but my heart is always going to be with Port Arthur. There’s no place like home.”

Coleman went to Summer Creek in the Humble Independent School District following the championship season to head a team whose record was 11-22 the previous season. He brought his team a whole set of firsts his first year, including the Bulldogs’ first victory over Humble and Atascocita and their first undefeated district season.

The Bulldogs improved to 15-3 for this year after their 63-36 win over Houston Austin at the James Gamble Classic on Thursday and are ranked the No. 2 6A school as of Dec. 23 by the Texas Association of Basketball Coaches.

When Coleman left the Titans as state champions, he says he took with him to Summer Creek belief in what he does.

“I know God blesses the work of my hands, so we put in work, confident in the things we do,” he said. “We’re going to play hard, we’re going to get after you. I allow my kids to play, so the thing that I bring more than anything is my belief system. I feel like that was the key when I came here. That’s one of the things that’s on my ring: ‘We believe.’ It starts with that, you’ve got to believe, then you have to put in the work. You’ve got to trust the process, so my kids are buying in, and I’m excited by our progress.”

It also helped to straighten things out about student enrollment with Atascocita, Summer Creek’s local rival.

“Atascocita would get most of their best players, so that was something that we had to take care of to make sure we had the kids we are supposed to get, and I think that was big,” Coleman said. “But that was the same thing at Port Arthur. At Port Arthur we had kids that should have been at Sabine Pass, or had a kid at Kelly or a kid at Port Neches. Getting those kids back home where they belong was huge. I think one of the biggest keys to having a successful program is being able to keep your kids.”

No longer having a commute that Google Maps estimates as more than 1½ hours, Coleman is enjoying all the extra time he can now afford to spend with his family living in Houston.

“I have a 10-year-old son,” he said. “I was traveling back and forth from Houston while I was in Port Arthur, so it was a blessing to have the opportunity to be at a school that was so close to where I live.

“I was on such a mission, going back and forth from Port Arthur to Houston while I was here. I never thought about it twice. Wherever I’m at, I’m all in, and when my heart was here, we were able to accomplish winning the state championship. I enjoyed every minute of it, but when I got the opportunity to go [to Summer Creek], again it’s a blessing to be able to do that.”

He’s also excited about the possibility of playing a Titans squad that’s still quite familiar to him.

“I know all those kids,” Coleman said. “This is only my second year at Summer Creek so these are the kids I left over here, so I know what they can do. I know their potential. It’s an extremely good team, and you have to be able to deal with them. That’s why I brought my kids to this tournament, because I knew the type of atmosphere that they have over here.”