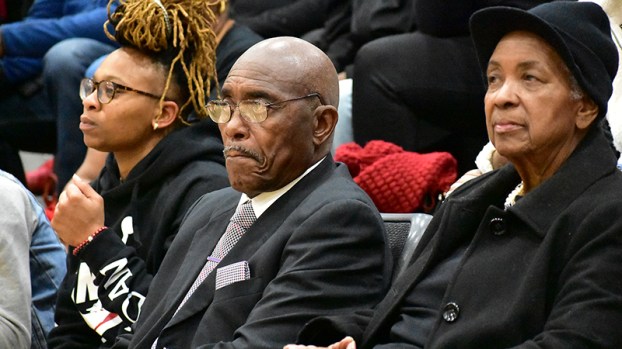 James Gamble glad to do what he can for Titans, tournament that bears his name

“I’m just a supporter, a cheerleader, a leaning post,” Gamble said. “Coaches can come and ask me questions. A lot of people say the game has passed me by, but they still are dribbling, playing defense and shooting, so that hasn’t changed.

“Basically I’m just a fan now that loves basketball, and I’m available for these youngsters and the coaches or whatever to give whatever I can.”

What he gives is his insight in a game he spent a lifetime loving, his support for all things Titans and his time as he watches from his table courtside the games that take place in the Competition Gym during the tournament that bears his name.

While at Lincoln, Gamble headed the basketball program until his retirement from coaching in 1988, winning 641 games and four state championships. He became transportation director after that until he stepped in once more as a coach for the 1998-99 season as a substitute. Gamble’s Bumblebees ended that season 29-6 and 4A state runner-up to Crowley.

He knows a thing or two about basketball, and coaches since his retirement have called upon him to give them advice.

“They just ask me to look and critique what they’re trying to do offensively and defensively, and whatever I see, I tell them,” Gamble said. “If I love it, I’ll tell them I love it. I just kind of critique some of the things they do and let them know how I feel about it.”

It’s something Gamble does to show his appreciation for the recognition he still receives.

“This is my city, so I support what goes on here,” he said. “This classic, I think, is a wonderful tribute to me. I love these kids. I support them, I come out, I do whatever the coaches ask me to do.”

That can mean everything from saying a few encouraging words to the players, to serving on the selection committee for picking the all-tournament team.

He’s happy to help the coaches that continue to serve as able stewards for his favorite team.

“We’ve had some fine young coaches over here who I think have done a magnificent job,” Gamble said. “We have some kids who have traditionally tried to uphold the standards in this city by the championship programs before them. And I just love what they do.”

His advice to this year’s Titans: Everyone needs to be confident in his ability to contribute.

“I always believed in total team effort that includes the ones that are on the bench,” Gamble said. “In my mind everyone has to do something if we want to be successful. We haven’t done that with this team yet. Some kids have not stepped up yet, but I think they’re capable of it. I think our coaches are capable of motivating them and directing them in a direction that will allow them to get the very best out of their abilities.”