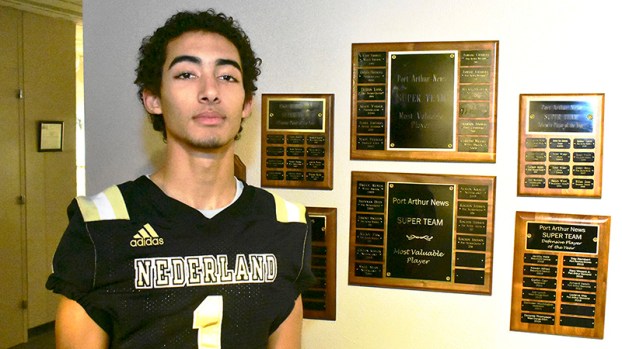 The Nederland Bulldogs’ rocky start to the football season settled some by the fourth game, a 48-0 shutout against Santa Fe. Senior quarterback Bryce McMorris became more relaxed, took his time and started to nail his throws.

“My teammates, all the guys around me kept me hyped up everyday, getting me ready to go, staying on my butt, making sure I’m doing what I’m doing,” McMorris said.

It was his teammates, playmakers like Josh Mazyck and Kyndon Fuselier, linemen like Jonathan Nguyen and Jadon Windon, that were the rock-solid base of support he could always trust. It allowed McMorris to shine in the pocket.

With that trust, McMorris managed to throw for 2,192 yards and 16 touchdowns to lead quarterbacks in District 12-5A-II. The unanimous All-District selection is named The Port Arthur News 2019 Most Valuable Player.

“I’m blessed, and it shows that all my hard work finally paid off,” McMorris said. “I’m not as happy with what we did this year, but I’m happy I could get this.”

Nederland ended their season 4-7, entering the playoffs as a fourth seed and bowing out to Manvel, which made it to the quarterfinals before getting knocked out by For Bend Marshall.

“We didn’t do as good as we thought we were going to do, not as well as we’d liked,” McMorris said. “I think overall we showed out in some games and that was good.”

McMorris already sees promise in the younger players as they take the reins for next year’s season.

“Next year they’re just going to have to work hard,” he said. “I already see it in a lot of our younger guys, that they’re already getting focused and ready, and they’ll be straight next year.”

McMorris hopes to continue playing in college, with his eye looking towards Texas A&M.

His advice as a graduating senior? Enjoy it while it’s yours.

“Don’t wish it away,” he said. “Don’t take anything for granted.”

The Memorial Titans have won it in five of the past six years and eight times overall, but this year’s... read more