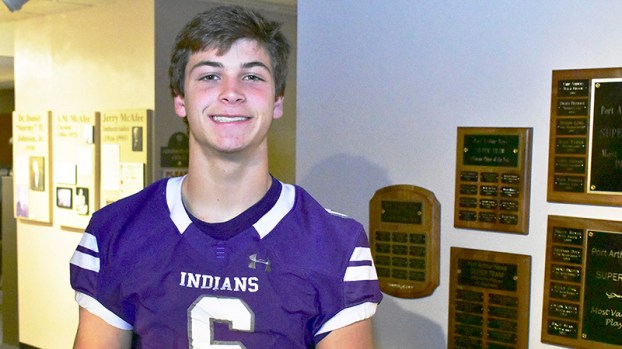 No one threw more than Port Neches-Groves’ Blake Bost.

The prolific passer completed 195 passes on 336 attempts. For a quarterback to be successful like that, everyone around him needs to provide support and guidance.

“It’s everybody around me helping me make the plays, and my coaches with the play calls and schemes every week to do what I do on the field,” Bost said. “It’s my receivers just making plays for me when I needed them, the O-line protecting me, letting me sit back in the pocket and be able to throw, and my coaches just calling the plays that work against the defenses we play.”

Bost passed his way into leading the Indians to a 7-4 record, including a 27-21 victory in the Bum Phillips Bowl that came down to the wire. He threw for 208 yards that night, including three touchdown passes and a first quarter 12-yard rush that put PNG on the scoreboard first.

Bost is the 2019 Port Arthur News Offensive Player of the Year.

“It’s really exciting,” he said. “I couldn’t have done it without my teammates and coaches, parents and God. Everybody around me helped me make the plays, and my coaches with the play calls and schemes every week to do what I do on the field.”

Bost and the Indians secured the No. 3 seed for 12-5A-II after defeating Nederland, though lost in the first round of the playoffs against Fort Bend Marshall. And like his Nederland counterpart, McMorris, Bost was also unanimously chosen for All-District as quarterback.

“We did really well,” Bost said. “I thought we battled hard in district and I think we did overall what we set out to do.”

Bost, too, wants to continue playing football in college, though the junior doesn’t have a particular school in mind.

“I’m trying to play some college sports somewhere,” he said. “Anywhere that’s best for me, that’s where I’m going go.”

The Memorial Titans have won it in five of the past six years and eight times overall, but this year’s... read more