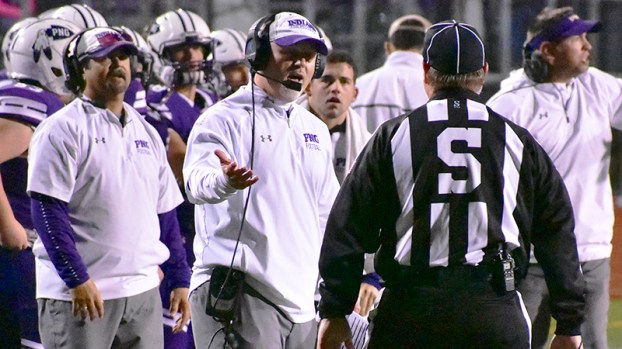 From the start of the season, Brandon Faircloth had to play a different version of “Musical Chairs,” mostly with the offensive line.

Losing eventual University of Texas signee Jaylen Garth to an ACL tear, Faircloth and his staff had to plug in holes quickly for a challenging non-district slate, only to weather more injuries at key positions. Still, the Indians fought through and not only gave Faircloth his 10th winning season in 11 years but came within 11 points of a fifth straight district championship.

“It is part of the game,” Faircloth said of injuries. “It was a great job by the coaches getting the kids ready to play. Everybody is always one play way from being the next man up.”

Faircloth has earned The Port Arthur News Super Team Coach of the Year honor for 2019 after the Indians overcame adversity to post the only winning record in Mid- and South Jefferson County (7-4). Highlighting the mark was the Indians’ second straight victory in the Bum Phillips Bowl, a 27-21 nail-biter at Nederland.

The past season was the first since 2015 that PNG did not play with current Texas running back Roschon Johnson. Junior Blake Bost took the offensive controls and threw for 1,857 yards and 14 touchdowns against nine interceptions.

PNG finished third in District 12-5A Division II, but by a slim margin. PNG lost 13-7 to would-be runner-up Crosby and 40-35 to eventual champion Barbers Hill, which reached the Region III semifinals.

“We do have a competitive district,” Faircloth said. “It’s about developing everyone on the team. At any point, it can be your turn. Kids put a lot of time in being ready.”

BRIAN JOHNSON ON OUTDOORS — Hunting activities for the Christmas break

By the time that you read this article, Christmas will be here! You will likely entertain family and friends. Hopefully there... read more