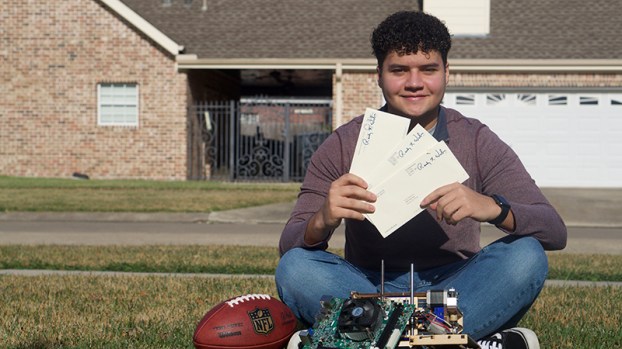 Sergeant Dakota Meyer of the United States Marine Corps spoke these words in a 60 Minutes interview in 2011. The Kentucky native had just received the Medal of Honor for his valor and courage protecting his fellow brothers during a deadly ambush deep in the heart of Afghanistan.

“I’m not saying I’m going to die, but I like to think of it as I need to do everything I can to the fullest, until my body or I can’t mentally do it anymore,” he said.

The Port Neches-Groves High School senior has received letters of nomination for not one, or two, but three military academies, including the United States Military Academy at West Point, Naval Academy and Air Force Academy.

“In order to be accepted to one of the military academies, you have to fill out their application and receive a nomination from either a congressman, a senator, vice president or president,” Osbourne said. “I received my nominations from Congressman Randy Weber.” 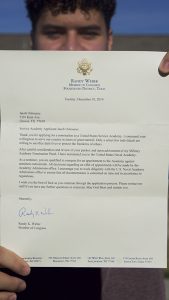 Port Neches-Groves senior Jacob Osbourne applied to the United States Naval Academy two weeks ago. The 17-year-old accomplished one of the hardest application process steps by receiving a nomination to by Congressman Randy Weber, making him one of only 10 students statewide to be nominated. (Cassandra Jenkins/The News)

Osbourne’s nominations made him one out of only 10 possible nominees.

“I was already interested in enlisting in the military, but I still wanted to receive my education so I saw that the military academies gave me the best of both worlds,” he said. “The first thing you do when you get to the academies is go through basic training, then you go to school, graduate as an officer and serve. I really like the discipline because it motivates me and I enjoy being challenged.”

Osbourne’s biological father owns an IT company in Houston, while his stepdad is a United States Marine Veteran. He said his future is inspired and motivated by both men.

If accepted into one of the five academies, the Cypress native is hoping to serve his country through cyber warfare. He built his first computer at the age of 9 and developed his own 3D printer last year.

“I build computers,” he said. “It’s my specialty. I worked for a company in Houston called Internet Inc. and I would go to clients and sell servers, work on computers and other day-to-day tasks. Over the summer I had an internship with a company called Gulf Coast Exchanger, working in their engineering program creating AutoCAD programs and Excel programs.”

Along with a 4.0 GPA and being a member of the National Honor Society, Osbourne also played as a halfback and tight end for the PNG Indians.

“I moved to Port Neches about four, five years ago,” he said. “Being new to the area, a lot of people talked about football. I didn’t play before but when I moved here I started playing my freshman year. My sophomore year I got moved up to varsity and ever since then I’ve been playing football. I’ve already received a couple offers so far.”

However, Osbourne tore his ACL earlier this year, but the pain and shock of losing his last season is what motivated him to pursue a brotherhood and career in the armed forces.

“I was really thinking that football wasn’t something I can do forever,” he said. “I saw the military as a similar opportunity. They are a brotherhood that challenges you the same as a team.”

While Osbourne awaits his acceptance letters in April, he said he will remain focused on school, working out, his team and his future.