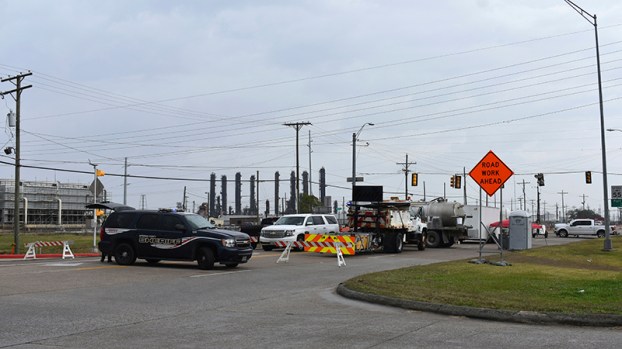 Charred towers at the TPC Group Port Neches site can be seen from FM 366 and Earle Street.

The replacement alarm system will be located on-site and remain in use until the permanent alarm system is returned to operation, according to an update from Unified Command.

But first the system must be tested and it was on Monday.

Sara Cronin, media relations official with TPC, said the on-site plant alarm system went as planned and was successfully completed within 30 minutes Monday morning. The alarm sounded eight short alerts, followed by one steady alert to indicate an all clear.

Advance and follow-up notifications about the alarm test were provided to the community on media and social media.

“Following the alarm test, a few comments on social media mentioned an inability to hear the on-site plant alarm,” Cronin said. ”It’s important to remember that the alarm test conducted this (Monday) morning was specific to TPC Group Port Neches Operations’ on-site alarm. This alarm is in place to alert individuals who are on the site. In the event that plant operations require community action, local officials will use STAN (Southeast Texas Alerting Network) to communicate with the community. “

Residents may call 877-843-7826 (toll-free) anytime to hear important alerts and notifications, or visit thestan.com to register for notifications.

Jefferson County Judge Jeff Branick said he did not receive any calls from residents of Port Neches regarding Monday’s alarm testing.

He added he made sure to work with other officials including Port Neches Fire Chief Paul Nelson and TPC on Sunday to get the word out that the testing would be heard early Monday morning.

“Hopefully everybody signed up for the STAN and got the call and this alleviated any anxiety with the alarm,” Branick said.

The alarm system was totally destroyed in the explosions at the facility on Nov. 27.

Cronin said the on-site alarms are in place to alert individuals who are working on the site. Given the instantaneous and evident nature of the event, individuals working on-site at that time were attuned to what was occurring. The on-site alarm was not sounded, as first responders were focused on life safety and response efforts.

Also as part of the ongoing response, teams continue to conduct mechanical integrity inspections of tanks and associated piping and equipment to ensure the eventual safe transfer of all remaining materials from the site.

Materials have not yet been transferred offsite. It will take several weeks to transfer all material.

TPC Group has restored lighting to select units in the plant, according to the update from Unified Command. The restoration of power to some lights on-site, and the restart of specialized equipment such as generators and pumps, is furthering a safe response effort. Teams continue to conduct mechanical integrity inspections of tanks and associated piping and equipment to ensure the eventual safe transfer of all remaining materials from the site.

Air Liquide will continue to have higher-than-normal noise levels for the next five to seven days as the repairs to their facility continue to be made, according to a notification from the facility, which is adjacent to TPC.

What are cheapest, most expensive gas prices in Texas?

Texas gas prices are unchanged in the past week, averaging $2.21/g today, according to GasBuddy’s daily survey of 13,114 stations.... read more