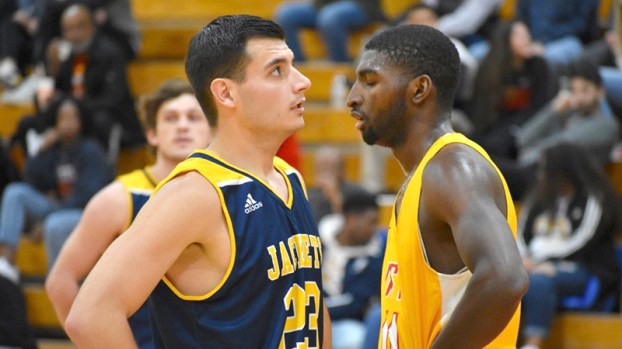 It was the first time in the 45-year history of the Bulldog Classic that Nederland won its own tournament. The Bulldogs beat Kelly Catholic 66-44 after Kelly made them start their season with a 56-53 loss.

Jase Miguez led the Bulldogs in scoring, accounting for 15 of their 66 points, all after racking up 20 in the 66-59 win against Alvin earlier that day. Miguez, in his senior year, worked hard for his team to finally win its own tournament and was named Most Valuable Player. It was a big night for him, of course.

“It felt amazing. It was a blessing,” Miguez said. “Yeah very confident we had a solid team my senior year. Our chemistry was off the charts.”

“He really scored the ball, he could always score the ball,” English said. “He continues to work on his game. In one of his biggest games he had 37 over here against Port Arthur Memorial one night and led us to a big win. Some kids have a knack for scoring, and he could get to the basket and he could shoot a jump shot. He’s continued to do that at the college level as well.”

The numbers tell the same story. At Howard Payne University, Miguez has been averaging 18.2 points a game, topping out with a whopping 44 against Southwestern on Dec. 7, which ultimately ended in a loss for the Yellow Jackets.

He’s become Howard Payne’s leading scorer, totaling 75 points more than the second-leading scorer on the season and shooting 50% for field goals, 40.5% for 3-point shots and 87.9% for free throws.

Despite the Yellow Jackets’ 1-8 start to this season, Miguez says he’s found his home in Brownwood.

“Playing for Howard Payne has been an absolute blessing,” he said. “In my opinion, any kid should be blessed to have the opportunity to play college ball to begin with. Howard Payne has been my best college experience so far on and off the basketball court. It is different from high school basketball because of the level of competition and the game speed is a lot faster.”

He didn’t always have such a home. He started his post-high school basketball career playing at Southeastern University in Florida and then went to Lamar State College Port Arthur for a year before joining Louisiana College.

He lasted at LC all of one-half semester.

“I didn’t start at Louisiana College,” he said. “I hardly played at all! It wasn’t a good experience for me at all.”

Miguez was quite unsure about his future at the time.

“I was scared that my dreams of continuing to play college basketball would be over with,” he said. “My dad helped me stay positive and told me to continue to work hard and that God has greater plans for me, which he most definitely did, because the position that I am in now at Howard Payne definitely proves that.”

Part of what brought Miguez to the level of proficiency he shows now is the amount of work he puts into his game. Every time he steps into the gym he refuses to be outworked, he says. His father was frequently right there with him, too.

“My dad he would always been in the gym whenever I was, whether it was the gym or the weight room,” Miguez said. “He played high school ball at Stephen F. Austin.”

“If anything he was known as a gym rat, and still is, I think,” English said. “He puts a lot of time into it and became a really good player.”

For a sport like basketball, it takes more than simply hard work, Miguez says.

“For me to score 44 points at Southwestern, it took my coaches and teammates’ trust in me,” he said. “When you have people that trust you like that it makes the game come a lot easier. The 44 points were nice, but the ultimate goal was to win the game. So I did whatever it took for us to try to win that game. The difference is just work ethic and trusting God at all times even though the ups and downs.”

Looking ahead, Miguez wants to continue to play basketball and he’s open to playing in venues across the world. He’s already trained with players from places like Columbia, Dubai, Jerusalem and Greece. He’s also open to becoming a coach, but he wants to continue keeping the game he loves in his life.

“Basketball is that peace for me, so therefore it helps me get through school knowing that I am still blessed to be able to play this amazing game,” he said.

English knows Miguez has a strong head on his shoulders. The same age as his own son, Colton, English watched Miguez grow up through Little Dribblers, middle school and as his coach in high school.

“He’s a good kid, a yes sir/no sir kid, never got in trouble, always took care of his business in the classroom, always had some goals and worked hard to reach him,” English said.

One thing playing in college has taught Miguez is that you shouldn’t quit just because things aren’t going your way.

“The advice that I would give to the kids that look up to me is to never give up during tough times and continue to trust God and your family at all times,” he said. “As long as you work hard and want to get better each and every day there is no limit on how good you can possibly be.”