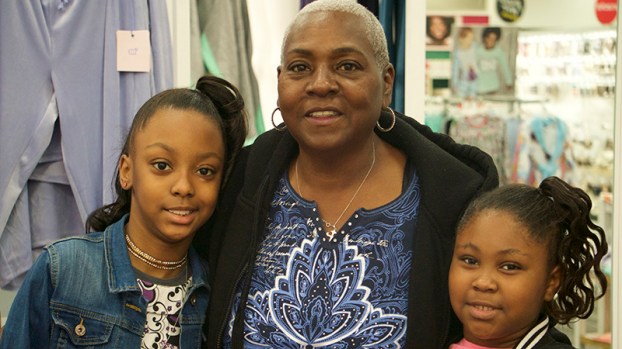 Stephania Taylor, center, and her two daughters Edna, left, and Michaela, right took a mini shopping spree Saturday at the Target in Central mall. The Taylor’s were one of a 100 families doing last-minute Christmas shopping Saturday with gift cards provided by a collaboration between Target and the Jack 1 Foundation.

If there is one thing that 9-year-old Kaylee Seymoure learned this holiday season, it’s how to manage money. 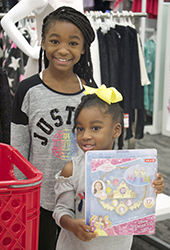 Kaylee Seymoure, back, and her little sister Chaslyn Jones, front, picked out a variety of toys, clothes and necessities at the Target in Central Mall.

Seymoure was one of a 100 children Saturday that participated in the second annual ‘Shopping with a Champion’ Christmas event at Target in Central Mall. The young girl, along with her younger sister, received a $50 gift card for toys, clothes and necessities provided by NBA star Stephen Jackson’s Jack 1 Foundation.

“I bought two pair of clothes, some chap stick, because my lips get really chapped and fake nails,” Seymoure said. “It was some of the stuff I needed because it’s Christmas. I had my phone with my calculator to keep track. I thought it was cool because I could experience how to spend my own money.”

“Shopping with a Champion” debuted last year as a way for the Port Arthur native and retired basketball player to give back to his hometown.

“It all started with the manager of Target, Anita Lovato, contacting my mother Judyette Jackson the founder of Jack 1, to collaborate with Target to make this event into something big,” Jackson’s sister Bianca Dixon said. “Jack 1 is his foundation and his way to give back to the community. This is his hometown and he wants to make sure that he helps his community however he can.”

During the signup period, members of the Jackson family gave away pampers, diapers and other necessities. 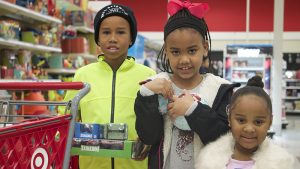 “This is Christmas and people’s financial situation isn’t always how they’d like to be, so every little bit helps,” Dixon said.

Unfortunately, due to flight and weather complications, Stephen Jackson was unable to attend this year’s event.

“Usually Stephen is here and he shops with the kids,” Jack 1 Foundation Public Relations Director Tamika Lewis said. “He gets to see them excited and last year he was holding babies and helping the kids pick out toys. He was like a big kid and they all had a good time enjoying it. It’s a joy for him to interact with those kids.”

Dixon said the event is something Jackson looks forward to every year, but although he couldn’t be there in body, he was there in spirit.

“He loves Port Arthur and he loves the love Port Arthur shows to him,” she said. “Any opportunity he can to give back he likes to take.”

Seymoure and the other kids at ‘Shopping with a Champion’ wanted to say one thing to Stephen Jackson in his absence — “Thank you.’”

A man who suffered non-life threatening injuring from a stabbing was released from the hospital but is not cooperating with... read more