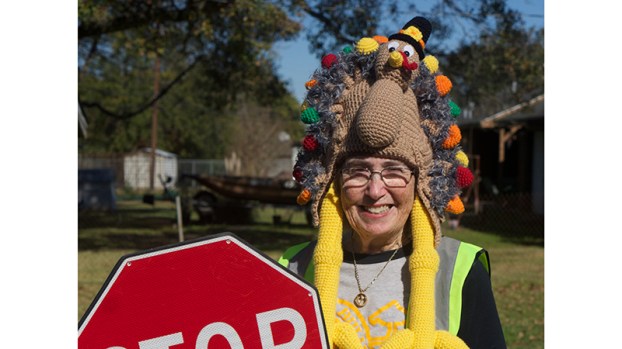 After the passing of her husband, the loss of her job and house, 73-year-old Janet Polk turned to God, who led her down a path as a crosswalk guard. Polk said the job has turned her life around and making fun, funky holiday hats for the children to admire is a part of what makes her laugh and smile. (Cassandra Jenkins/The News)

NEDERLAND — Janet Polk is a woman of many hats. She’s got turkey hats, Christmas tree hats, hats with flags, pinecones and black cats.

The 73-year-old can often be seen sporting her festive head wear along with a green vest fastened across her body and a red stop sign in hand.

Polk is a crossing guard for C.O. Wilson Middle School in Nederland and started her duties in August, bringing her own style and flair with it.

“I had been praying for a part time job,” Polk said. “I had a full time job in 2015, but they let me go after 19 years. I had breast cancer after that and then in 2016 my husband unexpectedly passed away.

“In 2017, (Hurricane Harvey) completely flooded my home and it all had to be renovated. So with a reduction in salary, the loss of my husband and the house, I was having a hard time making ends meet. So I said, ‘Lord, I sure could use a part-time job.’”

Polk, who is a longtime member of the First Baptist Church in Nederland, said her prayer was shortly answered — in a most unusual way.

“Within a month, one of my friends at church came bee lining across the church and said, ‘I have a job for you,’” she said. “I didn’t know she was even aware that I was looking for a job, but her son-in-law works for the City of Nederland and she found out there was this school-crossing job at C.O. Wilson that nobody was taking.

“My immediate thought was, ‘Oh no!’ Then God kind of slapped me upside the head and I realized this was the part-time job I’d been asking for.”

After picking up an application, Polk said she dawdled on the idea of actually being a crossing guard but returned two weeks later and was offered the position.

However, having missed the training deadline, Polk had to scour the Internet for safety and training videos where she veered a little off course. 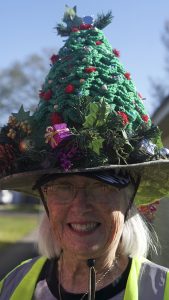 Janet Polk, 73, started making exotic and funky hats during her crosswalk duties at C.O. Wilson Middle School in Nederland as a way to connect with the young kids. She hand crocheted a Thanksgiving Day turkey hat, which she wore through the month of November. (Cassandra Jenkins/The News)

“I was watching YouTube videos on crossing guards and in one of the videos a woman wore some different hats,” she said. “I wanted to find a way to relate to the children, but I thought to myself, ‘I would never do that,’ and God said ‘Why not?’”

“I do a lot of crochet, so I crocheted my first hat,” she said. “I sat there waiting in my truck, wondering if I really wanted to step outside with this silly hat on my head. I finally did and it has just taken off from there. The kids like it and the parents like it.”

“It’s really been a blessing that the kids love it,” she said. “The older boys kind of walk by and look at me sideways with a little grin like they are embarrassed, but they start laughing. People look as they drive by and wave.

“By wearing hats I can connect to children and make them laugh. Someone was telling me that you never know what kind of impact you are having on children, you might be the only one that says ‘Good morning’ to them or ‘Have a good day’ or cheer them on. It’s just a blessing. I prayed for it and God provided.”

Charlie Pruitt’s name became synonymous with country and western music decades ago, his name linked with artists such as Tracy... read more