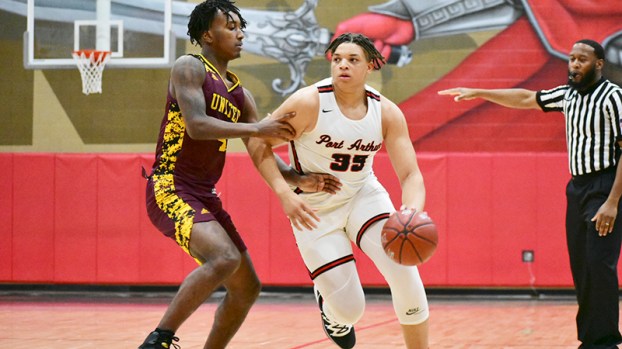 Kenneth Lofton Jr. of Memorial pushes the ball down the court against Jaylen Subject of Beaumont United in the first half Friday night. (I.C. Murrell/The News) 12-20-19

Again, the Beaumont United Timberwolves found a way to escape the Memorial Titans.

Wesley Yates sank two free throws — his only points of the game — with 8.4 seconds left, and 6A second-ranked United came up with a steal at midcourt before the final buzzer sounded to seal a 58-56 win in Port Arthur on Friday night, ending the 5A eighth-ranked Titans’ winning streak at four games.

The latest installment of the Port Arthur vs. Beaumont rivalry saw United take a 2-0 lead in the all-time series against Memorial, as last year’s meeting in Beaumont went down to the wire as well. Friday’s game also drew a capacity crowd that looked more like a standing-room assembly going into the final minute.

Memorial (13-5) climbed back from a 56-49 deficit with 1:55 remaining and had all but completed the comeback when Kenneth Lofton Jr. sank two free throws with 14 seconds to go.

“We wanted to play inside-out,” Memorial coach Alden Lewis said of getting United in foul trouble. “We wanted to dominate the paint with points and rebounds, and that’s the way we want to play.”

The Titans worked the ball to Lofton following Yates’ free throws, but Terence Arceneaux stole the ball from him at midcourt and United managed to run out the clock. Memorial coaches stood in amazement after the final horn as they were looking for a foul call, while Lofton had to be helped up off the floor by fans in disappointment.

“We were trying to go to the hole,” Lewis said. “We didn’t have any timeouts left. We wanted to go fast and get a good quality shot off. Unfortunately, things didn’t go our way, but hey, we live for another day.”

Arceneaux led the Wolves with 17 points, followed by Kason Harrison with 16.

Next for Memorial is the James Gamble Classic at home, Dec. 26-28.

The beauty of having a level roster of players is the diversity the team can afford to send out on... read more