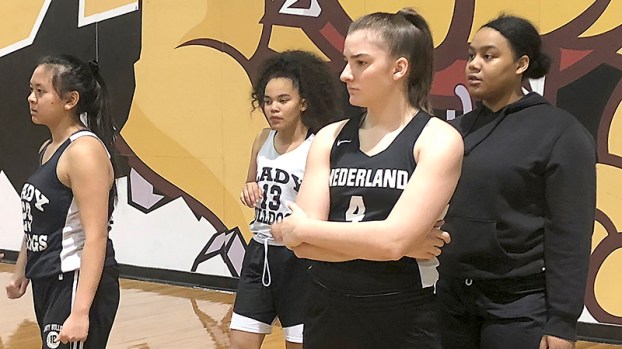 Kailey Showalter is still young when it comes to her basketball age. She began playing in seventh grade as a way to stay fit for track, her first love.

“I didn’t really like it because I was just getting ready for track,” She said. “When I came to the high school, the coach, [Nicole] Abercrombie, she really wanted me to start playing, so that encouraged me to keep going.”

She kept going then and now hopes to keep going as basketball supplants track as her favorite sport.

“My love of the game over the years grew stronger, and my team makes me want to keep playing,” she said. “I think it’s the sport for me.”

In the Nederland Bulldogs’ district opener against the Memorial Lady Titans, Showalter was the Bulldogs’ top scorer with 10 points and three rebounds. At the Orangefield tournament over the weekend, Showalter led Nederland with 13 points against host Orangefield.

She’s beginning to mature as a basketball player, and the results are showing, Nederland head coach Jody Walker said.

“From the beginning of school, starting in August, there’s been a big change, which is evident with the scoring that she’s doing,” Walker said. “The next phase is just attacking more with the ball, looking to help her teammates and making better decisions with the ball.”

As she continues to play more minutes she’s going to gain valuable experience, which Walker says is required to grow as a player.

“Basketball is something you have to do, you can’t just pick it up and play in October,” he said. “It’s something that has to be carried on.”

Showalter agrees that the amount of playing she’s done over her career in varsity is making her a better player. She played only a little as a freshman and sophomore. Now, a junior, she recognizes her own level of improvement.

She lets her performance and attitude speak for her as she leads by example, Walker said.

“She’s a very soft spoken girl, and I’ve expressed to the girls that your leaders aren’t always going to be the loud ones,” he said. “You’ll have silent leaders. You’ll have girls that’ll say ‘Follow me’ by their work ethic. She never moans, she never complains, but she’s a quiet leader.”

Now she needs to also learn to be more aggressive. Walker hopes Showalter will learn to be “selfish” — but in a good way. He wants her to take more shots, try to score more and, perhaps, pass a little less as well.

“When we have the ball, we want that girl to be trying to score,” Walker said. “We want her to be confident in her abilities, to be able to drive, to be able to get to the basket and get her to understand that that’s OK and not look to pass first, but to score first, because she is one of our better girls as far as being able to score.”

Her focus is basketball, and she definitely would like to play in college, but she’s not quite ready to give up on track either, and will run if she has the opportunity.

“I like running relays,”Showalter said. “Depending on the other girls that are in there. I have a passion for running in general and working as a team.”

Are you ready for Port Arthur vs. Beaumont? “This is a big rivalry”