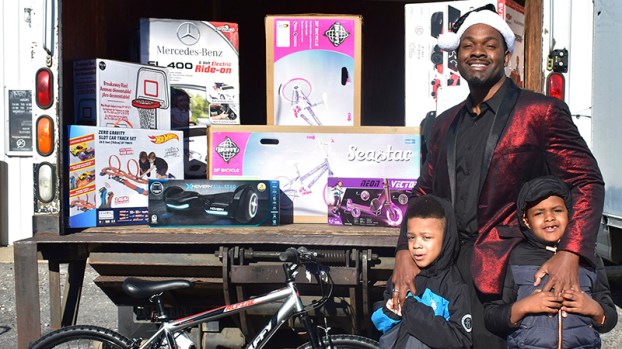 Dr. Levy Q. Barnes Jr. poses with his sons, Zachary, 4, and Levy III, 5, in front of just a few of the many gifts local children will receive during “Christmas With Dr. Levy” at the Pavilion. (I.C. Murrell/The News) 12-19-19

“They need love,” he said. “They need inspiration. They need mentorship. This is our way of showing love.”

For the sixth year in a row, Barnes will help underprivileged youths enjoy Christmas with a gift giveaway during “Christmas With Dr. Levy” at the Port Arthur Pavilion, 500 Procter St. The event will be held from 10 a.m. to 1 p.m. Saturday, but Barnes adds a line will be formed starting at 8 a.m.

An assortment of toys, bicycles and other goodies are given to kids who are orphans, raised by single mothers and grandparents, have parents who are incarcerated or are in families with financial difficulties.

Barnes, 35, gave a heart-wrenching example of a family he’ll help.

“The grandmother takes care of the children,” he said. “The mother died in a horrible car accident, and so she left three kids behind. The grandmother’s son is in jail, so she takes care of his children, as well. In total, it’s about eight children who live in a two-bedroom house.”

During the first three years of “Christmas With Dr. Levy,” Barnes split his efforts between Port Arthur and his native New Orleans. He then started to reach out to other groups and corporate partners to help bring more gifts to those in need.

“We opened the doors to the public and just let them know, if you’re less fortunate, if you have issues financially, come on out,” Barnes said.

Barnes is a bishop at Bethel Baptist Churches, one in New Orleans and another in Hemet, Calif., in the San Jacinto Valley. He is also known for hosting the television program Your Miracle and is the inventor of Q. Hair Regrowth Spray, which is sold in pharmacies and beauty supply stores.

He was born in New Orleans and moved to Port Arthur with his mother in 1991. He stayed for three years before moving back to the Crescent City and also spending time in Nashville, Tenn.

Demetra Williams, a friend who helps store the gifts for Barnes, is excited about another “Christmas With Dr. Levy.”

“I think it’s very good and it’s very nice,” Williams said. “He’s always there for the city of Port Arthur. He’s all about Port Arthur helping Port Arthur people, Port Arthur kids. He’s really a backbone for everyone here for those in need.”

A woman that was reported missing in Port Arthur and possible in danger was found safe. Port Arthur police learned... read more