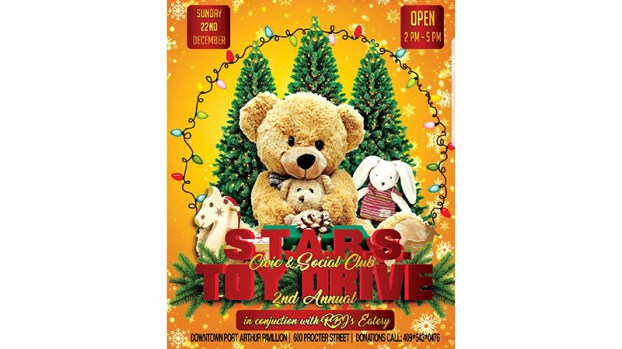 A civic and social club in Port Arthur is looking to make this a merry Christmas for children in need.

Sisters That Are Reaching Success, or S.T.A.R.S., is hosting its Second Annual Toy Drive in conjunction with RBJ’s Eatery from 2 to 5 p.m. Sunday at the pavilion downtown, 600 Procter St.

The group, consisting of women, works behind the scenes but don’t always publicize their efforts. They fed 25 families a full Thanksgiving meal for the holiday last month, give out gloves and hats and even helped a girl whose mother couldn’t afford for her to be a cheerleader — this was done out of pocket as they usually don’t have money for extracurricular activities.

“Most of us involved in the club are victims of Hurricane Harvey. Last year most families were just getting back in their homes and not able to supply toys. There are still people not in their homes,” Hines said. “We wanted to let the kids know we were here to let them have a wonderful Christmas.”

Every kid left with two toys and 60 left with brand new bicycles. They also received books, and club members prayed with the mothers. There were bouncy houses, food, music and more.

The group dug into their pockets again and bought more bicycles for some of the children who expressed interest after the event.

“Last year we had over 100 kids and this year we are hoping to have more. We are preparing for 200 this year,” Hines said. “It’s about giving back to the community.

“I’m a mother and I’m a grandmother and raised my kids as a single mother. We don’t know what resources other people have. This is something we enjoy doing every year.”

The club itself reaches out to women.

“Not everybody is where they want to be in life,” she said. “We go out and encourage other women. When they don’t have jobs, we help them. Some don’t know how to fill out applications. There are a lot of single mothers who have issues with their kids and we try to mentor to them.”

RBJ’s Eatery is helping again and is partly responsible for the idea of the toy distribution. Restaurant owner Dawn Bohanon is also a club member and it was her fiancé, Thomas Mouton, who took part in toy drives, going to the West Side of the city.

Bohanon said the event means a lot to her.

“Especially growing up in Port Arthur, not everyone is able to provide Christmas to kids,” Bohanon said. “(Mouton) came up with the idea. His mom was a single mom and couldn’t always give a good Christmas.”

She went on to say some families in need are more focused on school or putting a meal on the table.

S.T.A.R.S. has reached out through networking and will have someone man the grill and serve barbecue links and ribs. There will be music as well as a fire truck and the Port Arthur Police Department’s “Bear” or armored personnel carrier.

Two separate donations from different industry leaders on behalf of the city of Port Arthur and its police department go... read more