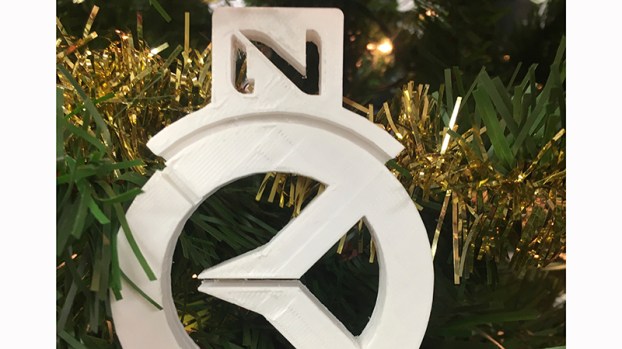 Allie Lee, NHS teacher for advanced engineering design and robotics, said this semester students wanted to put some personalization into their schoolwork.

“Making the ornaments this year wasn’t my idea,” she said. “The students have a 3D design printing project every year for the first six weeks and they wanted something to take home for the holidays. They come up with the ideas and one student said, ‘Why don’t we do ornaments?’” 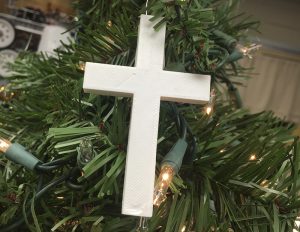 Nederland High School senior Hayden Johnson made a cross to represent the strength of his faith.

Students were instructed to design two ornaments, one to keep as a memory and another to place on the classroom Christmas tree.

“We use a design program called AutoCAD and first they had to design (the ornaments) on the computer,” she said. “It had to be a certain size, have a certain amount of effort to it and it had to represent something about them. What they believed in, what they liked about themselves or the class. It just had to have meaning behind it.”

Once the designs were completed, the class learned how to convert the file to an appropriate size and sent it through the 3D printers.

“My favorite part about the project is that 3D modeling has limitless possibilities of objects,” he said. “I am able to create and recreate from my imagination or from any type of reference.”

Nederland-native Trevor Gregory’s design was created with his current relationship in mind.

“I created a Krampus ornament, which symbolizes a German Grinch, and a heart with special features to display my relationship,” he said. “I liked that we were able to go into detail using AutoCAD and have a physical object that represented our design. I learned during this project that the smallest detail can affect the entire build.”

Lee said overall the first time project was a success in more ways than one.

“(The students) loved making the ornaments, because it had a personal aspect to it,” Lee said. “They have a personal attachment to the item so they were willing to work on it more. They grasped the project really well and had a take home product at the end of the day.

“They also learned the design process, project fulfillment and project management. It took all of their skills and put it into one project.”

More than a week before Christmas, Golden Pass LNG and two local organizations found themselves in a giving mood. On... read more