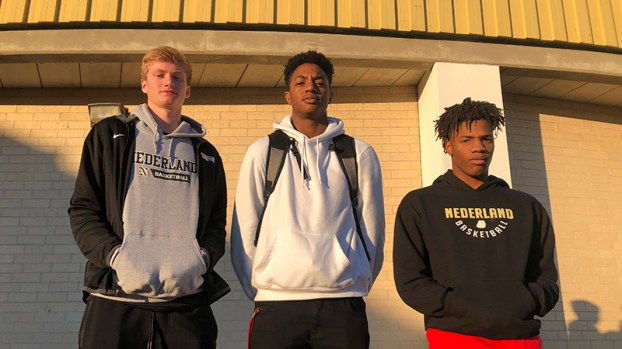 Tyler Jackson, center, who was named MVP at the Hardin-Jefferson Tournament, and Hayden Hefner, left, and Cedric Pete, right, who were named All-Tournament, get ready to travel to West Brook on Tuesday. (Brad Robichaux/The News)

The Nederland Bulldogs came away from the Hardin-Jefferson Tournament with a nice set of wins and superlatives.

The Bulldogs defeated Lufkin 52-48 in the semifinal and went on to beat host team Hardin-Jefferson 68-47 to win the tournament outright for the second year in a row. The solid showing brought Nederland’s record to 12-4.

Tyler Jackson was named MVP while Cedric Pete and Hayden Hefner were named to the all-tournament team.

“It was great,” Jackson said. “It was fun playing in the Hardin-Jefferson Tournament. We had a lot of games, which is good. Our bench was into it a lot. We just did better as a team and are playing more as a team now.”

“That’s key for him — the more mature he is the better player he is for us,”English said. “He’s done a great job for us.”

“I was happy that Tyler got MVP, he deserved it,” Hefner said. “He’s played well all year, so I was more so excited for him than getting All-tournament.”

Hefner returned to the court after missing the 10 previous games. It was fun to finally play again, he said, though he’s still a little rusty.

“It was challenging, I was sore after a couple of games, which was expected,” he said. “After a few games I was finally able to catch my wind and was able to get somewhat back to what I was in the past. I’m not as explosive, of course, but I was still able to pass it, find open guys and knock down a few shots, so I think I did well, considering I’ve been out for quite a while.”

Getting Hefner back on the court was a key part of the Bulldog’s performance, English said, though the team has benefited from the challenges his absence presented.

“I think we took advantage of Hayden not being there for the first 10 games or so of the year,” English said. “The kid really improved and adding him on gave us a good start, so we had a good weekend.”

Hefner was frustrated on occasion, but English and the coaches encouraged him to keep going and shake the rust off.

“It was fun to finally get back to playing with the team,” Hefner said. “I think it didn’t take a lot of adjusting to do, I think we meshed quickly, we’ve been together for two years now.”

Pete recognizes too that the Bulldogs are starting to come together. He hopes with Hefner back and the team working together, Nederland will continue to get wins.

“I think we did pretty good as a unit,” Pete said. “We were moving the ball and had one of our key players back, working as one. I hope we keep winning, there are tough teams out there.”

Pete is a versatile asset to the Bulldogs, English says, as he’s a great guard who excels at shooting and scoring points.

“He got off to a slow start but he’s really picking it up for us now, and that’s where we need him to be, because he gives you a little extra weapon in there for you,” English said.

Going forward the team still needs to improve its defense as players compete for court time.

Jackson is confident about the future.

“We’re going to be 10 times better for district,” he said.

The Bulldogs travel to Silsbee for a 7:30 p.m. tipoff Friday.

PORT NECHES — Coach Chris Smith starts yelling at him if he starts dribbling the ball instead of taking shots,... read more