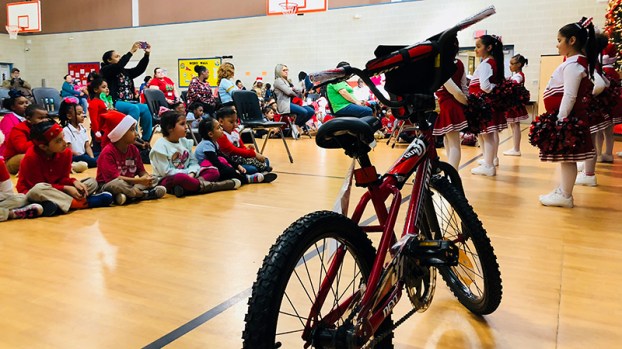 Students sit in anticipation in the Booker T. Washington Elementary School auditorium, waiting to learn who will be receiving one of the donated bicycles that were on display while the rest were kept behind the curtain on stage. (Brad Robichaux/The News)

The Royalist Social and Civic Club gave away bicycles to 28 students at Booker T. Washington Elementary in Port Arthur on Tuesday. The students all had perfect attendance and were either on the honor roll or most improved lists. 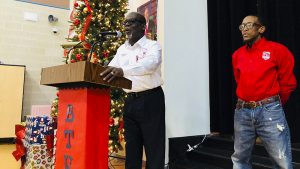 Royalist Club president Butch Battise gives a presentation before the bicycles are revealed. He is accompanied by Royalist board president and Port Arthur Independent School District Board President Brandon Bartie. 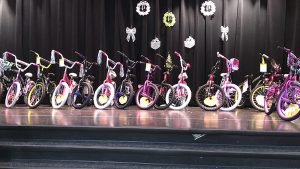 All the bicycles except for one were kept hidden behind the curtain on the stage in the Booker T. Washington auditorium.

The Royalist Club donates bicycles every year based on contributions from its own members and a few outside donations. Others donating bicycles this year were Tracy Thomas, Fred Vernon, Hardner Williams Jr., Kerry Thomas and Lee Doucet.

The organization will also present Christmas baskets to five area residents on Dec. 23. 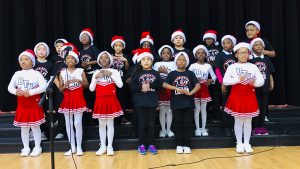 The Booker T. Washington choir sings “Rudolph the Red Nosed Reindeer” and “We Wish You a Merry Christmas.” 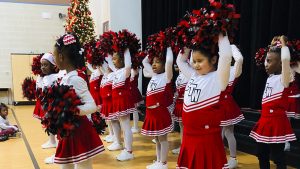 The Booker T. Washington cheerleaders perform a few cheers before the presentation. 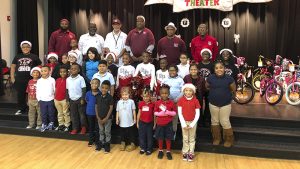 Members of the Royalist Social and Civic Club stand with 28 Booker T. Washington Elementary students who were chosen to receive bicycles donated by the organization.

Members of the Port Arthur City Council will be asked soon to decide whether to balance funding for improvement of... read more