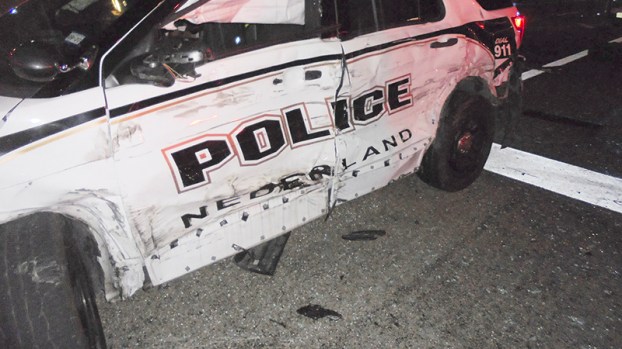 Nederland City Council approved the purchase of a Ford Interceptor SUV this week to replace this one that was totaled by a suspected drunken driver in late October. (Courtesy photo)

NEDERLAND — Nederland police have the green light from city council to purchase a vehicle to replace one that was totaled by a suspected drunk driver in October.

The cost for the replacement vehicle, which is a Ford Interceptor SUV, comes in at $42,841.60, Nederland Police Chief Gary Porter said.

The base price for this type of truck is around $34,000, then add in equipment and installation costs and the price rises.

Back on Oct. 26, Sgt. Tim Smith was facing eastbound and stopped on FM 365 waiting to turn left onto South 27th Street near CVS when he noticed a vehicle run a red light.

That’s when he saw the truck headed straight for him. He turned his wheel a tiny bit to the right, and the alleged drunk driver — who never slowed down — “made a glancing blow down the driver’s side of the patrol vehicle,” Porter said.

“Smith was not seriously injured; however, our patrol vehicle was totaled.”

The driver was arrested shortly after for DWI by a Texas Department of Safety trooper.

Porter said the driver was not insured and the city’s insurance policy picked up the claim and paid for the totaled vehicle, reimbursing the city approximately $18,000, which is about $24,000 shy of the cost of the new vehicle.