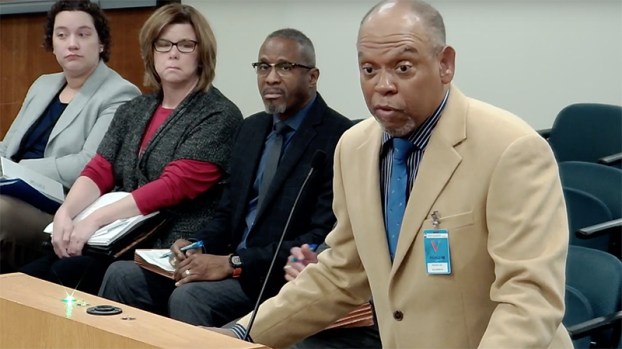 A screenshot of the Texas Commission on Environmental Quality meeting in Austin where former Port Arthur council member and founder of Port Arthur Community Action Network John Beard and other locals spoke to the commissioners on Wednesday.

AUSTIN — Commissioners with the Texas Commission on Environmental Quality took note of the group of locals and environmentalist who made the journey to Austin to discuss TPC Group on Wednesday.

After hearing from the group, some of which included former Port Arthur council member and founder of Port Arthur Community Action Network John Beard, Groves resident Suzanne Williamson, Port Arthur business owner Fred Vernon and area researcher and community organizer with Public Citizen Stephanie Thomas — the commission decided not to vote on the agenda item regarding incidents from 2018 and before referring the case to the Attorney General’s Office.

TPC was rocked by an explosion and fire the day before Thanksgiving blowing out windows and doors and leading to a shelter-in-place and evacuation. The facility is set to try and restart sometime this week.

Thomas and others believe their message was heard.

“It sent a clear message that when a company pays fines it needs to be more than a slap on the wrist,” Thomas said in a call with The Port Arthur News.

Beard, who worked at a local refinery for over 38 years, said the ruling to bump up the case to the AG’s Office is a good sign.

“You don’t have a major incident without several smaller ones,” Beard said.

Beard said the way the fines are assessed and levied is ineffective and not a deterrent. The legislature, he said, sets the fines and there is a cap in certain areas and categories built in for reductions if a violation has been taken care of.

Vernon said in a phone call after the hearing in Austin that he believes the commissioners were listening to the local group’s concerns about TPC.

“Had we not shown up, that item was literally a fine to be voted on then business as usual,” Vernon said.

Vernon said they do not know exactly how the case will play out but “it is a very rare thing for something like this to happen and definitely a victory to all the citizens of Jefferson County, Port Neches and all who were effected by the event.”