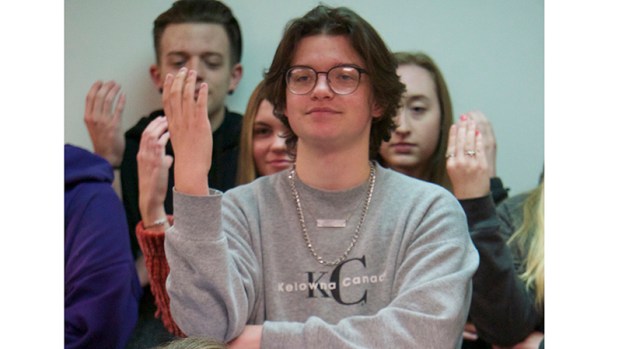 Port Neches-Groves High School ASL II student Wyatt Curry participates in a holiday class project by caroling, “All I Want for Christmas is You.”

CASSANDRA JENKINS — Learning a second language is important for many

One of the hardest things to do can be stepping out of your comfort zone, whether it’s something simple like playing a sport for the first time or watching a movie outside of your favorite genre. It can also be something big like moving to a new city or applying for that dream job.

Either way, it’s important to always be doing something new and exciting, and one of the most beneficial ways to step out of your comfort zone is by learning a second language.

Tuesday, Port Neches-Groves High School students spent time during their American Sign Language II class signing along to “All I Want for Christmas is You” for classes across the campus. As the students sang and signed, their faces lit up as they spread a new language to their peers and showed a unique way to communicate.

Senior Wyatt Curry said he has been studying American Sign Language since he was a freshman, allowing him to learn about a different culture and ways to make people feel included.

“Some people don’t even acknowledge ASL as a language,” he said. “I think that I’m definitely going to be involved in deaf culture and ASL long after I graduate next year. Making people feel included has always been an important part of my life.”

ASL is just one of thousand languages unique to it’s own individual culture.

Within the world, there are approximately 6,500 spoken languages, with about 2,000 of those languages having fewer than a 1,000 speakers.

The U.S. Census Bureau estimates approximately 380 of those languages are spoken in America.

According to research done by kff.org in 2018, the United States population is 60 percent white, 12 percent African American, 18 percent Hispanic, 6 percent Asian, 1 percent Native American and Pacific Islander with 3 percent of the population ranging in at two or more races.

The numbers are overwhelming, but it all boils down to heritage, ethnicity and keeping traditional culture and native languages alive.

Many American-born residents stick to traditional English. This is how a culture fades. If no one can understand, read or speak the language, how can the art, music, and literature of a culture continue to thrive?

Learning a second language is not only important to keeping the world’s heritage active, but can be greatly beneficial to the individual and his or her community.

Leadwithlanguages.org lists some of the top reasons to learn a new language. At the top of the list is to connect. “One of the most rewarding aspects of the human experience is our ability to connect with others. Bilinguals have the unique opportunity to communicate with a wider range of people in their personal and professional lives.”

Other items in the article include advancing your career, deepening your connection to other cultures, seeing the world and gaining perspective.

Learning a second language from ASL to French is beneficial to everyone, because it makes people feel important, heard and listened to. There are a hundred reasons to just do it.

How many children dream of doing big things when they grow up? I know I did, and I would imagine... read more