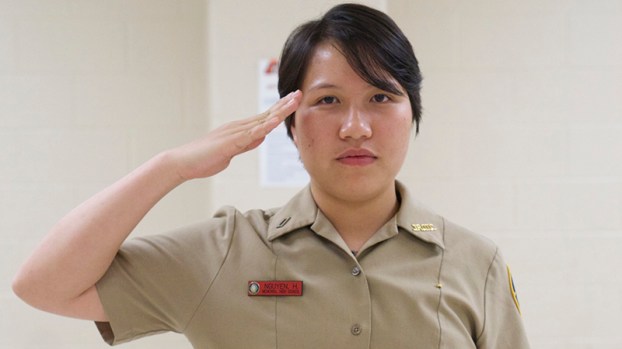 In the summer of 2020, Memorial High School student Huyen Nguyen will leave behind everything familiar as she plunges into a life of warfare and her new duties as a member of the United States Army, a role she always knew she would play.

“My senior year I started to really think about joining the military,” she said. “I’ve been in JROTC since I was a freshman. It was something I always wanted to do in my heart.”

Nguyen said her toughest decision was choosing a military branch, until fate intervened and she met with an army recruiter one day at a career fair.

“(The Army recruiter) was the first person I saw at the career fair that day, but she wasn’t the first one I talked to,” she said. “I went first to the Navy and then to the Air Force before speaking with the Army recruiter. Talking to the woman, I felt immediately that this was the one I wanted to join.”

Joining the United States Army spoke to Nguyen. She was born and raised in Vietnam, residing in Port Arthur for the past four years.

“I wanted to do something different and do something for our country,” she said. “For me, I am thankful to be here. In my country, they don’t give us the opportunity to go to school for free. We have to pay for it, and my parents have seven children, so it was impossible to send us to school. 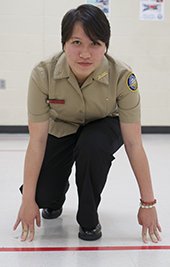 Huyen Nguyen, 18, is a CATE student at Memorial High School.

“When I got here, I realized how thankful I am to be able to go to school, get an education and play sports with my friends,” she said. “So now it’s my turn to give back.”

Nguyen swore into the military in early October, but upon completing her Armed Services Vocational Aptitude Battery test and scoring above a 41, she was cleared to join the 3rd Chemical Brigade to study chemical, biological, radiological and nuclear warfare (CBRN).

Chief John Martin, JROTC teacher at Memorial, said he is surprised but proud of Nguyen’s choice to join the armed forces and become a CBRN specialist.

“I have one kid who is a nuclear power engineer on a submarine, and he was the first,” Martin said. “(Nguyen) is my first to go into the CBRN program, so I’m very proud. It’s surprising because I thought she would go to college, but to make this decision to sacrifice and serve her country is commendable.”

To become a chemical, biological, radiological and nuclear specialist Nguyen will have to complete 10 weeks of basic training and 11 weeks of Advanced Individual Training in the classroom and in the field.

“You have to get extremely high scores on all tests to be a part of a program that few people get a chance to be involved in,” Martin said. “CBRN is a program designed to go around the nation, provide people with information on how to protect themselves against contamination, terrorist attacks, radiation and more.”

Upon graduation, Nguyen will begin her training next summer at the United States Army CBRN School at Fort Leonard Wood, Mo.