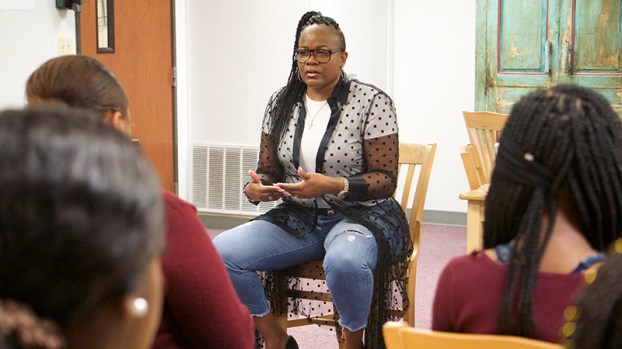 Sheryl Swoopes, the first woman to sign with a WNBA team in 1996, visited Tekoa Academy Friday to speak to the Ladies of Distinction about her basketball and life journey. (Cassandra Jenkins/The News)

Sheryl Swoopes was the first player to be signed in the WNBA, a feat all its own.

Swoopes is a three-time Olympic gold medal winner, four-time WNBA champion with the Houston Comets (1997-2000) and one of the league’s Top 15 Players of All Time. She was inducted into the Naismith Hall of Fame in 2016 and the Women’s Basketball Hall of Fame in 2017.

She was also the first and only female athlete to have her own Jordan-style signature shoe, the Nike “Air Swoopes.”

On Friday, Tekoa Academy’s Young Ladies of Distinction listened to her story — a journey on and off the court filled with passion, challenge and triumph.

“My passion has always been giving back and being in the community,” Swoopes said. “To be able to come to Port Arthur and have the opportunity to be a part of Tekoa and speak to the Ladies of Distinction is special to me. I look at those young ladies and I see myself in them.

“Sometimes they don’t really understand who they are or that where they come from shouldn’t really determine their success. I feel like I’m a prime example of that.”

Swoopes’ story started in Brownfield, a town southwest of Lubbock, where she was faced with adversity at barely three months old.

“I grew up in a very small west Texas town,” she said. “I had two older brothers and a single mom. My parents got divorced when I was only 3 months old. I didn’t meet my dad until I was 37. We struggled. We were on food stamps and assisted living, it was tough.”

Seeing the challenges in front of her, Swoopes set her eyes on basketball and education for success.

“Graduating from high school was what success looked like to me at a very young age,” she said. “It looked that way because of my surroundings and my circumstances. I grew up in a town that was primarily white and Hispanic. There weren’t a lot of black girls that were interested in doing what I wanted to do, and that was sports.

“I saw the challenges that we’re going to be in front of me, but I always knew that I wanted to do something different in my life. I wanted to be successful.” 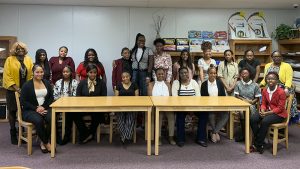 Sheryl Swoopes, the first woman to sign with a WNBA team in 1996, visited Tekoa Academy Friday to speak to the Ladies of Distinction about her basketball and life journey. (Cassandra Jenkins/The News)

After watching her two best friends get pregnant before graduating high school, giving up their athletic scholarships, Swoopes said she knew she wanted to be different.

“My friends were both very talented on the basketball court, but because they made the wrong choices one night, it completely changed their lives,” she said. “In high school it was easy to get caught up in what everyone else was doing, but it wasn’t until I realized that these two friends of mine were both pregnant and their lives were changing, that it was my moment. That’s when I said, ‘I get it.’”

Swoopes went on to graduate high school and accepted a full-ride scholarship to play basketball at Texas Tech, winning a national championship in 1993. After that year, her life and accomplishments spiraled.

Swoopes played overseas for six months after graduating from Texas Tech, joined the national team in 1996 and won her first Olympic medal before becoming the first woman signed to the WNBA.

In the organization, she played for the Houston Comets for 11 years, winning four championship games, before signing with Seattle Storm in 2008. Two days after her 40th birthday, Swoopes joined the Tulsa Shock before retiring in 2011.

Raising her head up, Swoopes’ voice rose as she told the silent room in front of her why her story mattered.

“I have been able to do some amazing things with my life because of basketball,” she said. “One wrong move when I was younger would have changed all that.

“I’m a firm believer that it doesn’t matter where you come from, where you grow up or what your current situation is. What matters is what you believe, what you buy into and what you want to do with your life.”

Swoopes’ message was simply “you matter.”

“What I want each and everyone one of (these girls) to know is that they matter,” she said. “Each one is important. We all try so hard to be like someone else, but each and every one of us is the way God made us. It’s about being our best original selves. It’s not easy, but it’s up to you to decide what you are going to allow those struggles to do to you and for you, that’s really my story.”

Swoopes now spends her time travelling, watching her son play basketball at the University of Texas Rio Grande Valley and speaking to the world’s youth in her Sheryl Swoopes Foundation for Youth.

Tekoa Academy of Accelerated Studies, along with its corporate partner Target, hosted their second annual shopping spree Friday in the... read more