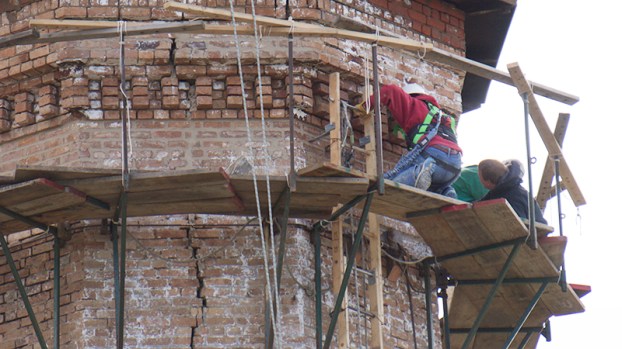 Andrew Tingler, a volunteer for the Cameron Preservation Alliance non-profit organization, scales the side of the Sabine Pass Lighthouse Thursday during a restoration workday. (Cassandra Jenkins/The News)

SABINE PASS — A piece of history is coming to life.

The Sabine Pass Lighthouse, which was built in 1856, will be relit for the first time since 1952 for two nights only. Viewers can look out past the river Friday and Saturday night and see the landmark light up the night sky from approximately 5 p.m. to 1 a.m.

The lighthouse started its restoration process the day after Thanksgiving, with Cameron Preservation Alliance spearheading the efforts. 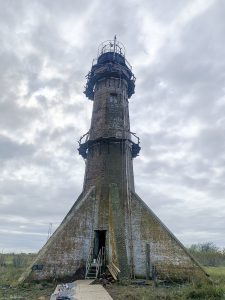 The Sabine Pass Lighthouse is undergoing a restoration process.

Andrew Tingler, a member of the group, said there is an important element to restoring this historical structure.

The lighthouse was lit from 1857 to 1952, except for a short amount of time during the Civil War, before becoming abandoned, vandalized and forgotten.

Vandals stole the copper roof and have broken windows.

Natural disasters like fires and hurricanes have further damaged the structure. 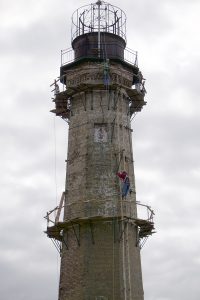 Andrew Tingler, a volunteer for the Cameron Preservation Alliance non-profit organization, scales the side of the Sabine Pass Lighthouse Thursday.

Tingler said Cameron Preservation is using money raised during 2000-05 and 2014 to restore basic elements of the lighthouse.

“We’re trying to save the masonry floors and the brick and mortar,” he said. “We’re going to put in stainless steal bands, close the top and do a few other things, like put in temporary windows and keep out the wind and water as much as possible.”

Although the lighting ceremony does not include an original lighthouse style bulb, workers are installing a new LED light that will reach out around a five-mile perimeter.

The lighthouse is off limits, but people can view the beams from a distance at Walter Umphrey State Park or on First Avenue, south of the Sabine Pass River.

“The lighting ceremony is kind of a special deal,” Tingler said. “It shows the community that we are working on it and that we hope to return it to the them as soon as we can.”

Tingler said the restoration process will go well into the end of January.

“[The lighthouse] is one of the oldest structures in the area,” he said. “Texas and Louisiana probably had around three dozen lighthouses apiece, but most of those have been lost through hurricanes and modernization.

“It is a pretty good chunk of history and it sits in a cool area of the Sabine Pass Battleground. It is the oldest complete brick building in Louisiana. They just don’t make them like this anymore.”

Officials with the Port Arthur Animal Shelter hope they can move into a bigger facility to address overcrowding at their... read more