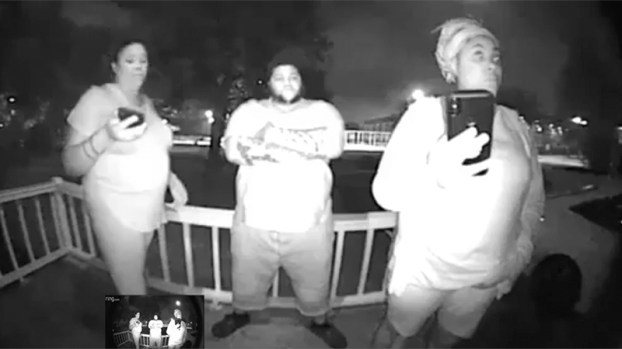 A Ring video shows a man and two women on the front porch of a home in the 3000 block of South Park that was later shot at Monday night. Police said a video was submitted to detectives and a report made but did not speculate on if or how the individuals in the video are connected to any crime.

Port Arthur police are continuing their investigation into a drive-by shooting of a home near an elementary school and a church.

A Ring video — which has been posted on several Facebook pages was reportedly taken from the home where the shooting occurred Monday night in the 3000 block of South Park. It begins with a man and two women on the front porch. The trio can be heard speaking with a man, possibly the homeowner, via the video doorbell, saying they had tracked a cell to that location and wanted the phone back.

A male’s voice can be heard denying having the phone but the two women and man were persistent for a few minutes before leaving. And as they were leaving, threats of violence could be heard.

The homeowner called police about suspicious persons at 6:27 p.m. but six minutes later police were rerouted to an aggravated robbery at a food mart on Seventh Street on the other side of town. That call came in at 6:33 p.m.

Port Arthur Police Det. Sadie Guedry said there was a second call to the home — this one came in at 7:13 p.m. of shots fired.

A second video taken from Ring is circulating on the internet along with the first one and this one shows a vehicle passing by the house and what sounds like six shots being fired.

Guedry said a police report has been made and the video submitted. She did not confirm the number of shots fired at the home or if the home was actually struck as the shooting is under investigation. No injuries were reported.

One of the persons who was on the victim’s front porch has been identified and detectives are trying to make contact with the person.