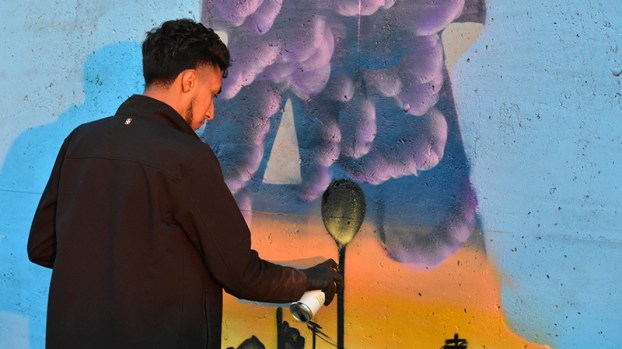 Elias Cabrera paints a water tower within the letter “A” in “ARTHUR” on the Seawall on Saturday. (I.C. Murrell/The News) 12-7-19

(Editor’s note: One of the artists featured Tuesday, Dec. 10, in “Seawall of art: Artists add flair to Port Arthur trademark” was incorrectly identified. The artist’s correct name is Jose Esparza. The News regrets the error.)

Every hour of every day, a giant boat coming and going from Port Arthur adds to the scenic beauty of the Intracoastal Waterway, just looking from the city’s Seawall. 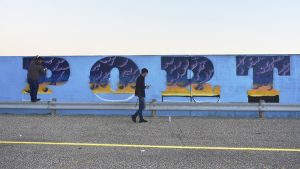 Jose Esparza, 27, and Elias Cabrera, 21, paint an image of Port Arthur within the letters PORT on the city’s Seawall as dusk settles Saturday.

As the sun set Saturday, two local artists were nearing completion of their biggest project for the city — adding another scenic view to the Seawall.

“The inspiration was to make our city more inviting, more beautiful,” said Armando Ruiz, a member of Port Arthur’s beautification commission who is a friend of artists Elias Cabrera and Jose Esparza.

The artists painted the words “PORT ARTHUR” against a light blue background on the face of the Seawall, using the Droste effect to illustrate a skyline of the city at sunset within each 3-D letter with black clouds coming in. 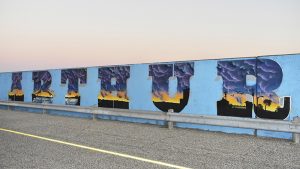 The letters ARTHUR entail an image of Port Arthur on the city’s Seawall.

“We tried to incorporate some of Port Arthur, like the refineries, the bridge and the clouds coming in,” Esparza, 27, said. The Merced, Calif., native, befriended Port Arthur resident Cabrera, 21, upon moving to Port Arthur approximately two years ago.“We just imagined like a sunset to dark,” said Cabrera, a graffiti artist. “We had that idea for a long time.”

Ruiz said the two artists started on the wall Thursday and took four to five hours to trace the letters, using a projector with a laptop at night. 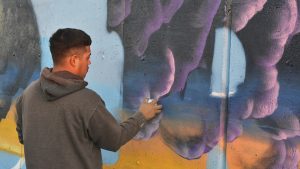 Jose Esparza paints clouds within the letter “R” of “PORT” on Saturday on the Seawall.

The painting was a volunteer effort.

“These guys have been here, on their time, haven’t been getting paid for this,” Ruiz said. “It’s been taking them 10-12 hours today plus another four to five hours to get the letters traced.

“This has been our biggest project yet. We worked with Public Works to get the boxes going, and with this, we moved on to a bigger canvas, which is now the Seawall. We got into contact with Drainage District 7 for that.”

Asked what project is next, Cabrera said: “We’ll see what the city wants to give us to do.”

Two adults and one juvenile were arrested for burglary after a keen-eyed neighbor noticed something out of the ordinary. Port... read more