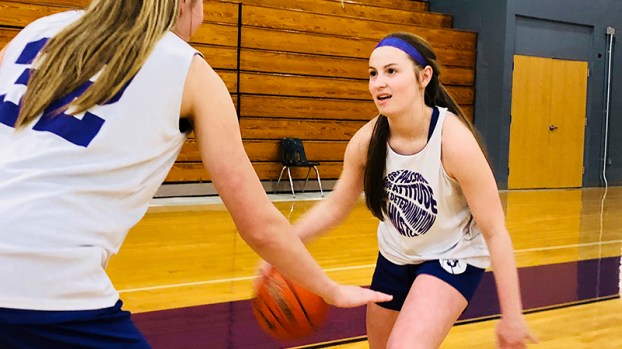 The senior point guard for the Port Neches-Groves Indians is coming back from a rough start determined to improve.

“I’ve been in a little shooting slump, so I’ve been trying to improve my outside shot, driving up to the basket, seeing the floor better,” Stampley said.

That determination translated into 20 points, five rebounds and three assists for the Indians during a 61-22 win against Liberty Friday at the Evadale tournament, followed by 14 more points in the 36-29 win over Evadale on Saturday.

“She’s extremely hard on herself,” coach Kara Skinner said. “It’s a job sometimes to get her out of her own head, but I really think she’s worked hard to turn it around. I think that we saw that this weekend. I’m hoping and I’m expecting her to build on that performance. I think she’s going to come out strong.”

Her performance makes her The Port Arthur News Girls Player of the Week.

Stampley’s hard work pays off. Playing since she was 5 and getting her first minutes in varsity as a freshman, Stampley puts hours into honing her game, a practice she picked up playing volleyball her first two years in high school and running track and ing playsoftball last year.

“I think it is definitely the work ethic, the commitment, dedication that it takes, the long hours out of school, and that carries over to basketball for sure,” she said.

Stampley also acts off the court to help Skinner out, helping organize basketball camps or contact the team over the summer for practice, things that Skinner believes Stampley doesn’t get enough credit for.

Skinner also says she believes Stampley actively tries to figure out what Skinner is thinking.

“I feel like her mindset is a little bit different than maybe other kids on the floor because she’s trying her best to get in my head and try to see things from my perspective, so that makes her very unique. She’s unlike any kid I’ve ever coached from that respect,” Skinner said.

Part of this is due to her role as a point guard.

Skinner says she preaches Stampley should “be an extension of the coach on the floor,” and Stampley has taken the message to heart.

“I think I contribute leadership, I’m vocal on and off the court,” Stampley said. “I strive to be an extension of Coach Skinner, help practice plans, make sure I know the game plan for each game.”

“She is fiery, she’s feisty,” Skinner said. “I sometimes have to jump on her in the middle of a game because that mouth of hers will just run, but that’s a testament to how passionate she is about the sport and that’s one of the things I absolutely love about her. She’s fun to coach.”

Tonight the Indians travel to Lumberton, Stampley’s former home, for a 7 p.m. gane.

“There’s new kids in there now but they’re definitely going to be tough competition,” she said. “We lost to them last time but we’ve made adjustments and I think we’re going to come out on top.”

Skinner knows as well that no matter what team she plays on, Stampley plays her hardest for PNG.

“I’ve watched her play travel ball; just seeing the difference in the way she plays for PNG over anybody else is something that makes me really proud of her,”Skinner said. “She bleeds purple for sure, even though she’s from Lumberton.”

BRIAN JOHNSON ON OUTDOORS — Christmas gift tips for your fisherman

With Christmas right around the corner, it is time for our annual fisherman’s wish list. If you are shopping for a... read more