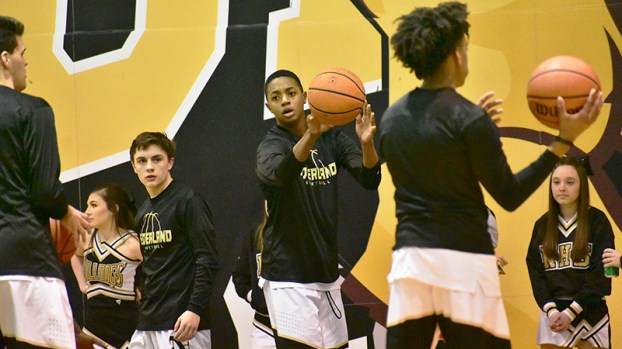 Tyler Jackson started basketball in seventh grade and began playing for his school in eighth, only a few years ago.

Everyone told him he should play because he was tall — in eighth grade he was already 6 feet, he says. His coaches say he’s still got some growing to do.

His stellar performance has earned him the recognition as The Port Arthur News Player of the Week.

Jackson says he wasn’t really thinking about how many points he was scoring.

“My teammates were giving me good looks and I just trust them to give me good looks,” he said. “I wasn’t even thinking about getting 30 in those games. It just happened.”

He does know that he’s good at what he does: low post.

“I feel like I’m a great low post player,” Jackson said. “That’s what I practice everyday. I just work a lot. I work a lot more than other teams.”

Assistant coach Larry Sterling says Jackson has natural talent for playing with his back to the basket.

“His footwork is really good, and that’s probably a big thing in that he’s quick,” Sterling said. “He’s still gaining strength and he’s not where he’s going to be strength-wise yet, but he’s long and he’s quick. That gives him an advantage. He’s good at finding the angles to the basket, to get around bigger post players.”

Sterling says what makes Jackson quick is his knack for beginning his turn toward the basket before he’s passed the ball. Whereas some would receive the pass first and then start their turn, Jackson is already moving and finding his angle.

Both coaches agree Jackson’s maturity and confidence are much improved .

“From sophomore to junior he’s matured a lot and his practice habits are way better than they were last year,” Sterling said. “His maturity is better as far as when things didn’t go his way. He’s able to respond better than he has in the past, so he doesn’t stay down when something bad happens, where in the past he might have gotten ruined in the first quarter if it didn’t go his way. He bounces back a lot sooner.”

Jackson says he’s continuing to work on his shooting. All of the points he scored against Alvin and Sharpstown were layups and free throws.

“I’m working on my jump shot so if people leave me open behind the three point line I can shoot it,”Jackson said. “If I could make a couple of those I will be good.”

Sterling is working with Jackson on moving him away from underneath the basket as well.

“He’s very good around the basket, but we want him to get a little better from 12 feet, and then from 15 feet, so we want his game to continue to progress away from the basket so he can play anywhere on the floor and be a threat to score,” Sterling said. “He’s still just scratching the surface of what he can be, and to me he’s one of the best post players in the area.”

The Bulldogs next play away at West Orange-Stark at 7:30 tonight.

WHERE ARE THEY NOW — The Hefner legacy: Brian Hefner proud of children, nephew playing ball

Brian Hefner took the trip down from Montgomery Texas to see his nephew Hayden officially sign his letter of intent... read more