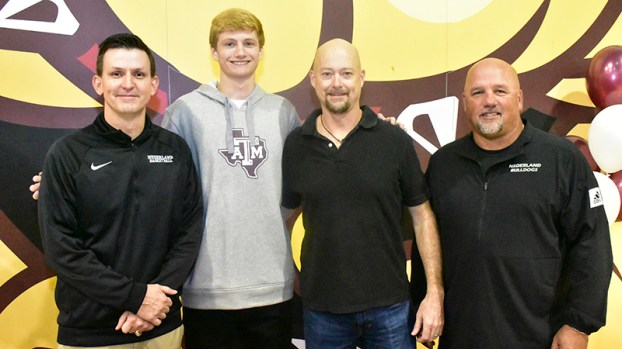 WHERE ARE THEY NOW — The Hefner legacy: Brian Hefner proud of children, nephew playing ball

Brian Hefner took the trip down from Montgomery Texas to see his nephew Hayden officially sign his letter of intent to play basketball at Texas A&M on Nov. 20.

He wasn’t just coming down to see family though. He was also coming home to see his lifelong friends and former Nederland basketball teammates stand next to the nephew they coached into becoming an Aggie.

“We’ve been friends our whole lives,” Nederland head basketball coach Brian English said. “We still go on vacations together. He was a really good player here, graduated in 1987, was honorable mention All-State. Just a really good friend of mine and a really good basketball player.”
All three of them — Brian Hefner, English and football coach and athletics director Monte Barrow — played basketball together at Nederland High School. Barrow was a year older than English and Hefner, but the three of them played during Hefner’s junior year at Nederland, a year that saw the Bulldogs’ formerly overlooked hoops team under coach James Weaver take on the powerhouse at the time, West Brook, and win.

“That was a pretty tough loss,” Hefner said. “That was a life lesson. I think both Brian and I will never forget that day. That was pretty pivotal. We didn’t make it to playoffs, we played our hearts out, and left it all out there on the court.

“But, you know, it’s all just about handling those losses, and how you deal with them and how you pick yourself up and move on. We had a lot to be proud of because we accomplished a lot for the program in Nederland.”

English, who had played basketball with Hefner most of their lives since their early days with YMCA teams, said Hefner was a high-flying player.

“He could really score with the ball,” English said. “He had a great midrange game, which is gone in today’s game. He had great legs and could really jump off the floor, explode off the floor. I just remember I use to throw the ball up to him and he’d go get it. Those legs were really good. He was a shooting guard and I was a point guard and we had a really good time here.”

The pair played once more in their first year at Lee College in Baytown. English went on to finish junior college at Wharton County Junior College, and then went to Texas A&M.

For Hefner, though, basketball was becoming more difficult to keep up with. He suffered ankle and knee trouble that kept him from being more competitive, and at the junior college level, being competitive and standing out is the name of the game.

“There were definitely challenges in the junior college level,” he said. “It’s more about trying to self-promote to get to that next level. For me it kind of wasn’t the greatest experience because we were used to playing a certain level of team basketball, and it was more like, let’s try to see how many points we can score so we can get that scholarship to that four-year university, which is what everybody was trying to do.”

Brian finished college at Lamar State University and graduated with degrees in biology and chemistry.

His first job out of college was in Kansas at a refinery, and that was also where he met a swim coach named Kristen who would become his wife. After his family moved back to Nederland for Hefner to work at Huntsman Corporation for a few years, the family settled in Montgomery, where Hefner sells medical equipment for his father’s company.

“I played for as long as my body would let me,” he said. “I would still be out there. I play with my kids, out front, and worked with them on their shooting.”

His youngest daughter, Lindsey, is a guard at Montgomery High School and will herself become and Aggie, joining her cousin Hayden to play for Texas A&M. His son, Brock, is developing skills of his own as a sophomore at Montgomery.

In Nederland, Hefner’s basketball legacy is carried on by his nephew, Hayden, who is often compared to his uncle.

“They always said he was a high flyer, he could jump really high,” Hayden said. “So they always remind me of him because I’m a real jumper too. He’s somebody cool to look up to, a relative as someone you want to be good as. I always thought he was pretty cool.”

Hayden has some ambitions of his own to break out of his uncle’s shadow.

“I thought I wanted to be like him, but now I definitely want to be better than him,” Hayden said. “I feel like I’m somewhat getting there. I’m most definitely have a better shot. He could jump real high, and could jump higher than me — maybe, I don’t know if I want to give that to him.”

He’s had the chance to hone his skills against his uncle frequently. He, his brother Chase, Hefner and his son Brock have played games of their own to learn from Hefner’s experience.

Time may have finally caught up to Hefner, though. He tore his rotator cuff playing against Hayden, Chase and Brock, and he thinks that’ll probably end his playing days.

His legacy is carried on capable shoulders, though, and basketball will help each of them when they pursue other endeavors.

“That’s what we promote for our kids, this is a great teaching lesson,” Hefner said. “It’s not always about how many points you scored in a game, or how many rebounds you got, or passes. It’s collectively as a team, how well do you play together on the court, and I think it definitely carries over into business, and how you’re going to get along with people. So I definitely think it teaches kids, a life lesson for sure.”

Khristian Curtis orally committed to play baseball at Texas A&M his sophomore year. Baseball is what he loves and that’s... read more