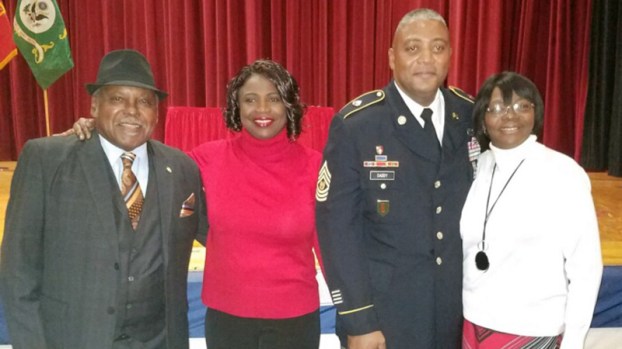 Lemuriel Sinegal heard a story on Thanksgiving that demonstrated her worst fears but also reaffirmed her deep-rooted faith in God.

The Port Arthur resident was hosting numerous family members at her Lake Arthur Drive home, using the occasion to recognize her son — Robert Caddy III — who recently retired after 30 years of service in the United States Army as an E9 Command Sergeant Major.

Caddy joined the service as a young man in 1989, excelled over multiple deployments, including stints in Bosnia and Iraq, and retired this year.

Sinegal used Thanksgiving as an opportunity to invite numerous generations to her home so they could give thanks for her son’s service and celebrate his healthy retirement.

As part of the celebration, the family created a detailed timeline marking the 30 years Caddy served, noting where he was during each year, what unit he was in and at what rank he was serving.

“It was very emotional, very rewarding,” Sinegal said. “We did this tribute for him and he was in tears. He would share information about what he was doing during the timeline.”

That’s where the story came into play.

Caddy shared with his family members that he was deployed in a hostile environment when he and fellow soldiers were taking fire.

Helicopters were coming to pick up injured servicemen, Sinegal said, adding her son noticed a wounded soldier on the ground.

“He was almost on the helicopter but stopped, turned around and made the decision not to leave his soldier. So, he went back amongst all that shooting and picked that man up and put him on the helicopter.

“I’m glad he didn’t share that with me at the time because I would have been worried about him. Oh my God, he went through a lot with all the deployments he did fighting for and serving his country.”

According to Sinegal, this year’s Thanksgiving celebration allowed family members and loved ones to share how proud they were of her son.

In turn, Caddy got the chance to tell each of those in attendance about their personal impacts on him, how their love and prayers were vital to his positive service and eventual return home.

Caddy graduated from Stephen F. Austin High School in Port Arthur, joined the military at the age of 19 and went on to serve his country with honor, eventually rising to numerous leadership positions.

With two grown children already established in the professional world, he has begun the next phase of his life with wife Stephanie in Oklahoma.

Sinegal summed up the family’s special Thanksgiving by saying: “It was very emotional and touching. That is when I realized my son had been in danger and I had no idea. That is why I kept praying for my son to come home safe. Everybody was thanking God because he did come home safe.”

Stephen Hemelt is publisher of The Port Arthur News. He can be reached at 409-721-2445 or stephen.hemelt@panews.com.

MARY MEAUX — Be a Santa to a senior at Christmas

There is a segment of our community that is sometimes forgotten as families celebrate Christmas with the children. While the... read more